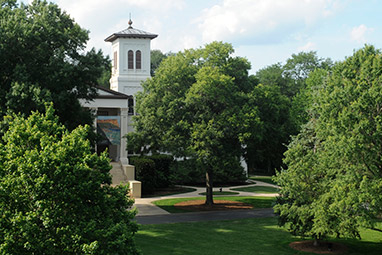 SPARTANBURG, S.C. — Something’s going on below the surface at Wofford College, and it has the campus community seeing green.

Thanks to the $4.25 million grant from the Romill Foundation, the Milliken Sustainability Initiative at Wofford College is underway and already making a difference.

Within the past year the college has installed new metering technology on the main campus and made improvements to the Goodall Environmental Studies Center as well. The latest development includes an easily accessible online storyboard that will display all of the college’s sustainability initiatives, real-time energy usages and graphics comparing the different buildings across campus.

Rob Richards, Wofford College’s energy sustainability manager, says anyone with a computer and internet connection can access the data.

“This storyboard is meant for education and occupant engagement. We want the students and faculty to realize their small, everyday decisions do make a difference,” says Richards. The link for the storyboard will go live at the beginning of the fall semester.

Wofford has already realized savings from the new energy metering and monitoring system. Measuring and collecting the data has led to a variety of energy management opportunities, says Richards. For example, the college has been experimenting with altering cooling and heating set points in different residential buildings while they are unoccupied and adjusting the housing options for various summer camps.

“The storyboard is valuable for its demand graphs that compare the previous week to current resource consumption,” says Richards. “For instance, this week’s data for DuPre Hall increased considerably when the Panthers moved in. We can also see the effect of weather and other factors.”

“This storyboard is a wonderful opportunity to get into a mindset of energy conservation and to get a better handle on building consumption,” says Richards. “Ultimately, conserving energy is something we all have a choice on, so I hope we can foster outreach to both the Wofford campus and the larger community.”