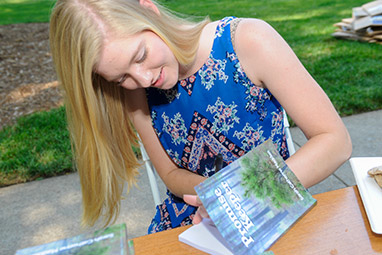 After months of research, meetings, writing and revising, one Wofford College student has published her first novella. Sarah Madden, who will graduate with the Class of 2017 on May 21, says that the entire process almost never happened, though.

"Promise Keeper" initially was written for the novella-writing workshop in the spring of 2016 with Dr. Deno Trakas, Hoy Professor of English. Madden originally did not intend to register for the course. An unexpected cancellation, however, changed everything.

“At the last minute, a writing intensive course in the environmental studies department was canceled. A good friend suggested and then insisted I take the novella class,” says Madden, an English and environmental studies major from Winston Salem, N.C. “Dr. Trakas wasn’t expecting such a last-minute, out-of-the-blue request to join his class, so he was hesitant to let me join. I had to convince him that I was prepared to handle it.”

Throughout the semester, Madden crafted a 96-page work. She received feedback through workshops and peer reviews.

“The story became much bigger than I expected. The students in the workshop pushed me. They were extremely talented writers, and being in that environment really helped me to push myself as well. The creative collaboration was a nice catalyst,” says Madden. “Dr. Trakas told us that we were ‘running with fast horses,’ and I can’t agree more. My classmates had such an impact on the finished product.”

Madden turned in the novella and was encouraged to submit it for consideration for the Benjamin Wofford Prize, a biannual prize that allows for the publishing of a piece of student writing, fiction or non-fiction. She received word that "Promise Keeper" won in July.

“After that it was a long process of revisions, which was by far the hardest part. During the semester that I was writing it, I was living in the story, and it was constantly running through my head whether or not I realized,” says Madden. “When I returned to it in the fall, it was hard to get back into the stories and to make edits without feeling like I was detracting from the original writing.”

Despite the difficulties, the novella has come together into over 130 pages, which detail the journey of a young woman in high school coping with a life-changing event. Madden says the story is about a young athlete who has part of her identity taken away from her. The story reflects Madden’s own personal experience of “having to adapt your personal identity when your strengths change.”

Although Madden had never written fiction before, she always has had a passion for writing. She currently is a writer and reporter for the Old Gold and Black, Wofford’s student newspaper, and a student intern in the Wofford College Office of Marketing and Communications. She says she feels most comfortable writing personal essays, creative non-fiction and journalistic pieces.

“I never saw myself as a fiction writer. I’ve always loved creative nonfiction because I feel like I’m the most honest in that… it’s also my go-to if I need to process something that has happened in my life. In terms of fiction, I never would have imagined I’d be capable of creating such an extensive piece of work.”

In addition to relying on support from classmates for revision and motivation, Madden says she also asked fellow environmental studies major Madison Jones ’17 to lend his skills in photography: “I had seen his work in capstone presentations in class, and he’s from Thomasville, Ga., near my story’s setting, so it turned out perfectly. I’m honored and thankful to have had this help.”

Madden was recognized during the college’s Honors Convocation on Tuesday, May 9, after which the community was able to pick up free copies of "Promise Keeper."

“This is the story that I had in me to tell. Hopefully it’s something that someone needs to hear or wants hear and enjoys," Madden says.

Madden also says the story as published this semester may not be over: she has been encouraged to turn the novella into a full-length novel, which she intends to do.