Preparing to enter the next frontier 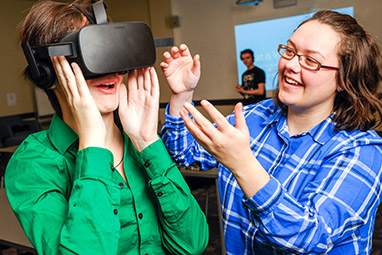 It takes a few minutes to fit the Oculus Rift virtual reality headset and adjust the focus, but once on, the headset shrinks participants to the size of a fly, places them face-to-face with an angry Tyrannosaurs Rex and encourages them to reach out and touch the friendly forest animals gathered around a campfire.

"I think it's the next media, like film was in the 1920s," says Brad Benson, a senior history and philosophy major from Spartanburg. Benson is one of the Wofford College students who explored virtual worlds during the college's January Interim. "We examined ways in which virtual reality is an alternative means of experiencing reality," says Benson. "While gaming is what most people think about when they think about virtual reality, there are other implications as well."

"The NFL is even considering portable cameras placed on player helmets to give viewers a virtual experience. For example, if you're a Panthers' fan, you could see the entire game through Cam Newton's eyes," explains Benson.

"Virtual worlds offer us the chance to escape our earthly bodies and fight monsters, transcend physics, visit exotic places (both real and imaginary), and interact socially with others all over the world," reads the class description. "It's no wonder that millions of people around the world choose to spend their free time in virtual worlds rather than in the real world."