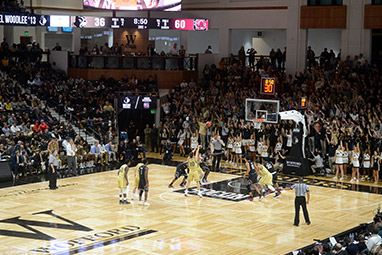 SPARTANBURG, S.C. – It was standing room only, and the energy was electric as the Terriers took the court for the first time Friday, Nov. 10, in the sparkling new Jerry Richardson Indoor Stadium for the men’s basketball home opener against the Gamecocks of the University of South Carolina.

“The atmosphere was off the charts,” head Coach Mike Young told the Spartanburg Herald-Journal. Young’s friend and USC head coach Frank Martin, who had agreed to bring his team to Wofford for the opening of the Jerry Richardson Indoor Stadium, for the opener, agreed. “Great environment,” he added.

It was standing room only in the sold-out 3,400-seat arena that replaced the Benjamin Johnson Arena, which now is being renovated as a new fitness center for Wofford students, faculty and staff.

The basketball arena also includes Club 51, an entertainment area for club seat holders, and four concession stands, one with a full kitchen.

The Boneyard student section provides baseline seats behind the basket nearest the Wofford bench. It was filled Friday with excited Wofford students who showed their appreciation for Jerry Richardson himself, seated in a front-row seat nearby.

The college also shared the following video with Mr. Richardson: