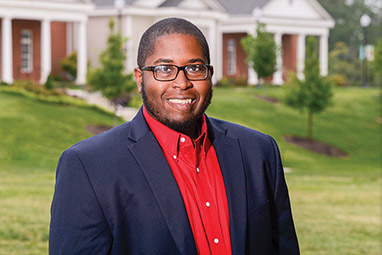 SPARTANBURG, S.C. — Demario Watts loves to learn and fully expects his new position as assistant dean of students for diversity and leadership development at Wofford to be filled with opportunities to do just that.

"I think it's important to show students that I'm learning, too," says Watts, who holds a bachelor's degree and two master’s degrees. He's enrolled in a doctoral program in organizational leadership and hasn't ruled out a J.D. at some point. "I'm already excited about advocating for students, building relationships with them and others in the Wofford community and developing new initiatives in leadership development."

Watts had been serving the college as assistant director of residence life for the past two years. In addition, he is one of the college's Title IX deputy coordinators and the leader of the college's National Coalition Building Institute (NCBI) team.

"Demario is admired by his peers and well respected by our students," says Dean of Students Roberta Bigger ’81. "His knowledge, experience and creativity make him ideal for this position."

Watts already is listening to student needs and gathering student ideas. He firmly believes that lasting progress will come from them.

"It's about giving students respect and a voice," Watts says. "So much starts with a conversation."

Some of the plans coming out of those conversations include:

"One of the things that students tell me is that they want a particular student organization or initiative to survive after they graduate," Watts says. "That means training future leaders."

Watts has worked in almost every area of student affairs. This new opportunity combines that experience with his work with NCBI.

"The NCBI program is so dynamic," he says. "Our differences don't have to be a cause of discrimination and divisiveness. We start by looking at what diversity looks like in the room, always asking who we're leaving out. ... It's important to know and understand our past — our biases and ouches — so we can move forward as a community."

Watts is quick to say he doesn't have all the answers, but he's always eager to learn.