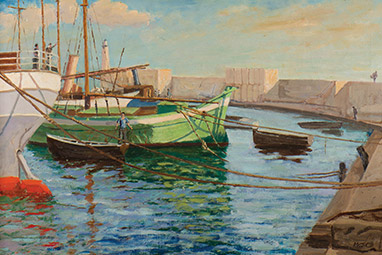 SPARTANBURG, S.C. - The artwork of Sir Winston Churchill is the focus of a lecture tonight (Friday, Sept. 15) at Wofford College as the college announces that exhibition of his works in the Rosalind Sallenger Richardson Center for the Arts has been extended through Sunday, Sept. 24. (More details.)

“Passion for Painting: The Art of Sir Winston Churchill” includes 10 paintings from the esteemed collection of the family of the late Julian Sandys, grandson of Churchill, and from the collection of the National Churchill Museum. The exhibition surveys both Churchill’s landscapes and seascapes, the artist-statesman’s favorite subjects.

The exhibition, on the lower level of the Richardson Family Art Museum, has offered a unique chance to view paintings by Churchill that are rarely seen in North America.

On Sept. 14, Dr. Warren F. Kimball, the Robert Treat Professor of History emeritus at Rutgers University, presented a lecture on the paintings, “Winston Churchill: Painter as Politician, or Politician as Painter?”

At 6 p.m. Friday, Timothy Riley, curator for the National Churchill Museum, will provide the curator’s talk, “Passion for Painting: The Art of Sir Winston Churchill,” during the exhibition’s closing reception. The event, also free to the public, will be held in the Jerome Johnson Richardson Theatre.

Beginning with Churchill’s work from the 1920s, the paintings on view represent four of the five decades in which he pursued what was for him the greatest of hobbies. It also includes several objects from the permanent collection of the National Churchill Museum, including a cigar humidor given to Churchill by the people and government of Cuba (1946); a top hat signed by Churchill, President Roosevelt and Joseph Stalin (1945); and a rare dispatch box from Churchill’s time as chancellor of the Duchy of Lancaster (1915). Also on view are several items from Churchill’s visit to Westminster College, where he delivered his most significant post-war speech, the “Sinews of Peace,” commonly known as the “Iron Curtain Speech” on March 5, 1946.

The exhibition is a collaboration of the National Churchill Museum at Westminster College in Fulton, Missouri, and Wofford College.

Riley, the Sandra L. and Monroe E. Trout Director and Chief Curator at the National Churchill Museum, notes that Churchill created more than 570 paintings during his lifetime. “He maintained that he was an amateur painter, though I believe visitors to the Wofford exhibition will agree that Churchill was an amateur with considerable skill,” he says. “He did not create for the purpose of exhibiting them widely. For Churchill, painting was a therapeutic activity. It helped him sharpen his focus – it was a deeply personal exercise. For audiences today, Churchill’s paintings provide us with a glimpse of the great leader’s power of observation and his highly creative mind.”

Landscapes or seascapes are the subjects of 350 of Churchill’s art. He often planned his holidays – to the south of France or Marrakech – in order to satisfy his interest in colorful scenery, which he painted en plein air, or outdoors, Riley continues.

“The oil paintings in this exhibition – Churchill painted almost exclusively using oil paints – are some of the best examples of Churchill’s artistic efforts,” Riley says. “They show his love for light and shadow, and intense color. He famously referred to the act of painting as a ‘joy-ride’ in a paint box.”

Riley continues: “Part of Churchill’s great success as a man – and a leader – was his creativity. The same mind that could paint an image with words – ‘broad sunlit uplands’ – applied thought to color, light and shadow. I think audiences today can appreciate the depth of Churchill’s genius by looking at his painting.”

On Sept. 14, Dr. Warren F. Kimball, the Robert Treat Professor of History emeritus at Rutgers University, presented a lecture on the paintings, “Winston Churchill: Painter as Politician, or Politician as Painter?”

“As Edwina Sandys, Churchill’s granddaughter, has pointed out, ‘There was art in his [Churchill’s] politics, but no politics in his art,’” says Kimball, who has published more than 50 essays on Churchill and Franklin Roosevelt in the era of World War II. “Despite his skills and reputation as a painter, despite his Nobel Prize for literature, his renown in the United States, and throughout the world, is largely as an international political statesman, specifically during the Second World War. With great pleasure, I’m here at Wofford College to talk about that aspect of his quite extraordinary life.”

Kimball also is the author of “Forged in War: Roosevelt and the Second World War,” “The Juggler: Franklin Roosevelt as Wartime Statesman” and books on the Morgenthau Plan for Germany and the origins of Lend-Lease. He edited, with commentaries, the three-volume collection “Churchill & Roosevelt: The Complete Correspondence.” He is an academic adviser to the Churchill Center and senior editor for the Churchill journal, Finest Hour.

An exhibition of works by a variety of artists who have sought to capture the South’s seasons and sky on canvas, “The Mountains Are Calling: High Seasons in the Carolinas from the Johnson Collection,” also has been extended through Sunday, Sept. 24. It is on the upper level of the Richardson Family Art Museum.

With the extension of the exhibition, hours for Saturday, Sept. 23, will be from 9 a.m. to 5 p.m. and Sunday, Sept. 24, from 1 to 5 p.m. Regular exhibition hours in the Richardson Family Art Museum and the Richardson Family Art Gallery are Tuesday-Saturday 1-5 p.m., with extended hours until 9 p.m. Thursday; the venues are closed Sunday and Monday. Admission is free.

In the Richardson Family Art Gallery, also in the Center for the Arts, is “Delano & Lange in Spartanburg,” an exhibition of images by renowned American photographers Dorothea Lange and Jack Delano taken for the Farm Services Administration in the 1940s showing African-American and white tenant farmers in Spartanburg County displaced by the building of Camp Croft. The photographs will be on exhibit through Oct. 21.
Upcoming in the Richardson Family Art Museum, beginning Oct. 3, is “In the Service of Teaching and Learning: An Inaugural Exhibition of the Wofford Fine Arts Collection.” The exhibit will be on both levels of the museum through Dec. 18.

Other current and upcoming exhibitions at Wofford College include: “WWI at Home and Abroad” in the Sandor Teszler Library Gallery, Sept. 22 through Dec. 18; and “Buddhism in Sites and Images” in the Martha Cloud Chapman Gallery in the Campus Life Building, through Nov. 16. The exhibits are free and open to the public. Hours for the Sandor Teszler Library Gallery are: Monday-Thursday, 8 a.m.-midnight; Friday, 8 a.m.-7 p.m.; Saturday, 10 a.m.-5 p.m.; and Sunday, 1 p.m.-midnight. Hours for the Martha Cloud Chapman Gallery are daily, 7 a.m. to midnight daily.