From Yosemite to the Golden Gate 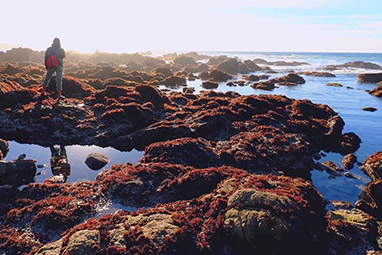 SPARTANBURG, S.C. – As a cold rain became wet snow, 14 Wofford College students who were camping out on campus in the dead of winter stuck it out without complaint. They were preparing themselves for something bigger – their January Interim, California Landscapes, from Yosemite to the Golden Gate.

To prepare for the rigors of the month, students tried out their camping gear on campus before departing for California. That’s when Dr. Peter Brewitt, assistant professor of environmental students who co-led the Interim project with Dr. Kaye Savage, associate professor and chair of the environmental studies department, says he knew the trip was going to go well.

“As rain turned to sleet turned to snow, the students, some of whom had never done this kind of thing before, did not make a peep of protest,” Brewitt says. “Their positivity served us well, as rainstorms, blizzards and rockslides changed our schedule but not our attitudes.”

The group explored the California’s ecology, geology, history and literature while climbing through waist-deep snow, panning for gold and building a campfire on the beach.

“California’s kind of a mythical place for the rest of America – a land out by the sunset, full of excitement and opportunity and craziness. And so it proved for us,” says Brewitt, who has lived in California, as has Savage.

“We wanted them to experience firsthand its geological and ecological wonders, its lively history and tumultuous present, its wacky people and delightful burritos,” Brewitt says.

The group split time between camping, lodging in motels and hostelling their way around the state. When camping, students cooked for themselves in small groups on camp stoves.

In California, the students saw a wide range of ecosystems as they hiked the High Peaks of Pinnacles National Park hoping to spot endangered condors. They walked among 3,000-pound elephant seals at Año Nuevo State Park, camped next to strawberry fields at Sunset Beach, went tide-pooling with marine biologists at Carmel Point, craned their necks up at 2,000-year-old sequoias in Calaveras Big Trees State Park, and toured a vineyard and learned about its sustainable farming practices. The group also visited a petrified forest and spent an afternoon on the beach at Point Reyes enjoying the sunset and campfire conversation.

“For someone who always liked to know the plan or what was next, this trip really made me appreciate the beauty of accidental surprises,” says Griffin Bosserman, a sophomore from Daniel Island, S.C. “Everything from the randomness of our group to the daily deviations and detours was serendipitous.”

While some of the places the Wofford class visited are world famous, including San Francisco, the Big Sur coast and Yosemite National Park, Brewitt says that the small things were impactful as well.

“We found joy in banana slugs in the redwood forests and well-earned salmon burgers after a long, snowy hike. Even the van rides were a rollicking good time as the group bounced across the state,” he says. “I will remember the places we visited, of course, and the wildlife we saw, but the thing that I will carry with me the longest and that I will hope for in future Interims is the wonderful spirit of exploration and friendship that our group felt throughout the adventure.”

Bosserman agrees that the people made the difference: “It was truly amazing how our rag-tag group all gelled and became some of the closest friends I have ever made. This class was truly an amazing experience. I'm not sure if it's from the spirit of the Wild West or clean Sierra air, but there's magic out there.”

by Sarah Madden, Wofford Class of 2017