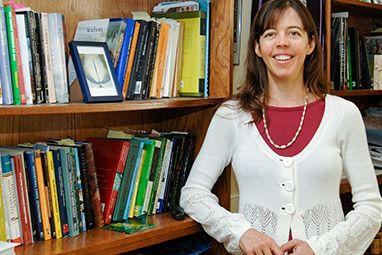 SPARTANBURG, S.C. – As a Wofford College professor, Dr. Cynthia (Cissy) Fowler loves to learn. She recently spent four weeks at the East-West Center in Honolulu, Hawaii, as one of 25 professors from institutions across the country to learn about Islam in South Asia and Southeast Asia.

Fowler, associate professor of sociology and anthropology, has a connection with the region; she has completed ethnography fieldwork projects in Indonesia since 1996. The country is 90 percent Muslim, but Fowler primarily worked in non-Muslim communities and felt a need to learn more about the majority population.

“It’s amazing how much I’ve learned about Islam in Indonesia. I never realized how much I still could learn,” says Fowler. “Also as a teacher of Asian studies at Wofford, I found this to be a wonderful opportunity for continuing education.”

The Islam in Asia Institute was hosted by the National Endowment for the Humanities (NEH).

Designed by Dr. Nelly van Doorn-Harder of Wake Forest University and Dr. Peter Hershook of the East-West Center, the four-week program featured renowned scholars in the field of Islamic and Asian studies. They covered topics ranging from the history of the spread of Islam to South and Southeast Asia to “what it means to be Muslim” in contemporary society in these regions.

One lecture that focused on music stood out to Fowler. Using a multimedia presentation and performance, the presenter taught how Islam has influenced regional music and how, in turn, the music impacts communities.

Alongside daily lectures and readings, the professors-turned-students also watched films and visited museums related to the topic. They visited the Islamic Asian art exhibit at the Honolulu Museum of Art and Shangri La, the Doris Duke (of Duke University and Duke Energy) estate, which features Duke’s extensive collection of Asian art.

“I’ve learned so much from every lecture and every visit, and it’s been wonderful. In general, we professors love to learn because it serves many purposes,” says Fowler. “It makes us better professors, and the better that professors are, the more informed, educated and interested students will be in what they learn.”

Fowler can directly take her learning from the institute and apply it at Wofford. As a culmination of the learning done at the institute, she completed an individual project that correlates to a course she teaches at Wofford on global health. In the past the course primarily focused on South Asia and Southeast Asia, but at the institute she studied the impact of Islam on global health and how the Middle Eastern and North African (MENA) region may be connected based on the shared faith.

“The MENA program at Wofford is developing in interesting ways, and I wanted to be able to understand more about that part of the world in order to better develop my own courses,” she says. “The more the MENA and the Asian studies programs collaborate, the stronger they are, so I’m excited to help with building that bridge.”

Ultimately, Fowler is thankful for the experience that helped her grow individually but also fostered a strong connection between the participants.

“We’ve established this community that is going to persist beyond this course,” she says. “We’re building our intellectual network of people who are interested in Islam and interested in Asia. ... We’ve become a part of this transnational academic network, and we’re having conversations about things related to academics in the wider geopolitical world, and that ends up benefiting Wofford and our students because that’s what academic institutions do, they have conversations.”

The NEH sponsors summer institutes across the country on various topics. The East-West Center was established in 1960 as a diplomatic think tank meant to foster better relations and understanding among the peoples of the United States, Asia and the Pacific Islands.