Wofford student to spend a semester circumnavigating the globe 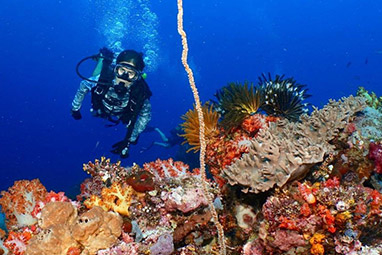 SPARTANBURG, S.C. — It’s not everyday that you are asked to sail a leg of a trip around the world, but one Wofford College student is doing just that.

Woody Middleton ’18 will be spending his fall semester sailing aboard the 57-foot sailboat Nogal through the islands of Indonesia, Malaysia and Thailand. In what he describes as the opportunity of a lifetime, he will help crew the ship, scuba dive through breathtaking coral reefs and reconnect with family.

Middleton, an accounting major from Jupiter, Fla., grew up sailing and has spent summers as a counselor at Camp Sea Gull in Arapahoe, N.C., but he’s never sailed a boat this large.

“It’s exciting but also a little intimidating. For example, we’re very limited on clean fuel for the first part of the trip, making navigating the area a little more difficult,” says Middleton. “I haven’t sailed competitively or frequently in the past two years so I’m mostly just excited to get back out into the water and spend time with family.”

Nogal belongs to Middleton’s aunt and uncle. They left California 16 months ago with their daughters to sail around the world. The family has sailed through the Pacific and around Australia, visiting remote islands along the way. For their upcoming destinations, they are sailing with local rallies that offer guidance and safety. Middleton, who flew out to Bali on Aug. 21, will be aboard the ship until almost the end of the year.

“I see this trip as opening a door for me. I will expand my skills in sailing, but I will also make connections with people who may want to do this sort of trip again. There’s a big network of people who you wouldn’t realize are doing similar things,” he says.

Despite spending his fall semester abroad, Middleton will still graduate from Wofford on time in the spring. Following graduation, he plans to pursue a career in accountancy, eventually attending a graduate program.

“This is the experience of a lifetime. The timing worked out perfectly,” he says.

Middleton’s family keeps a blog about their trip. Find updates, photos and more information at http://teamnogal.com/.