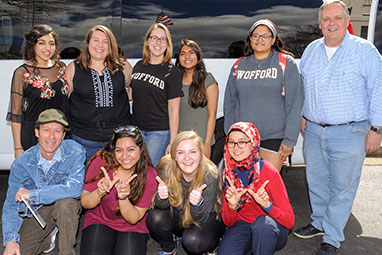 SPARTANBURG, S.C. — Although Wofford College senior Saleha Salehani recognizes that religion “can sometimes be a quarrelsome topic,” she, along with the other members of Wofford’s chapter of the Interfaith Youth Core (IFYC) is working to amend that issue, and Ripple is another step in the right direction.

Recently a group of Wofford students, led by the Rev. Dr. Ron Robinson, Wofford's Perkins- Prothro Chaplain and Professor of Religion, visited Elon University for Ripple, a regional conference for college students, faculty and staff to explore the idea of pluralism and how it can bring people of all faiths or no faith together for community service.

Kate Gibson, a senior religion major from Boiling Springs, S.C., and co-president of the Newman Club, the college's Catholic student organization, attended the conference. "I gained so much from the short time we were there," she says. "The panel that opened the conference was incredibly informative and honest." She particularly enjoyed the mindfulness exercises including guided meditation, Christian prayer and a Buddhist meditation. "It was a wonderful experience that I plan on tying into my everyday life."

The various religious and nonreligious perspectives present at the conference astounded Mahnoor Haq, a sophomore English major and philosophy minor from Darien, Ill., who practices Islam.

“Ripple is a great example of what the Interfaith Youth Core aims to accomplish,” she says. “We had a huge group of people from different backgrounds listening to different priests, rabbis, imams and atheists. They were giving their testimonies and really talking to each other without using religion and faith as a point of tension.”

According to Haq, pluralism (the notion that various religious or spiritual viewpoints can coexist peacefully and positively in a single society,) is important because it highlights the real world, which is both diverse and challenging. “Managing the differences we see in everyone is something we need to learn in order to thrive in the world," she says, “and service is a good way to give us a common goal."

By promoting pluralism on campus, IFYC fosters an environment that creates:

Salehani, the president of Wofford’s IFYC and a biology major from Moore, S.C., says these ideas then spread beyond faith and into the day-to-day lives of people so that they can better manage their differences. She is happy that Wofford's faculty, staff and student body are learning to use "religion and faith as a bridge instead of a barrier."