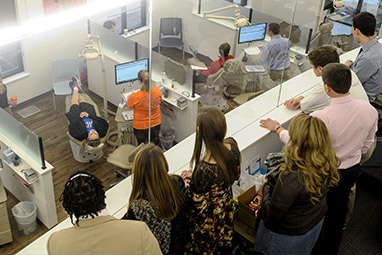 SPARTANBURG, S.C. — Dr. Trecy Watson, Wofford Class of 1998, encouraged the Wofford students in the Introduction to Dental Medicine Interim to be dental ninjas during the month of January.

"Be present. Watch. Learn. Soak it all in," he advised the group of Wofford College students learning more about possible careers in the field.

Watson worked with Dr. Charlie Bass, Wofford's pre-dental program adviser, to arrange rotations with professionals in the field to help the students explore different options. During the month the students also will take a trip to a dental lab in Rock Hill, spend several weeks interning with various practitioners and visit the Medical University of South Carolina in Charleston for three days of tours, interviews and classes.

Watson is following in his father's footsteps, says Bass, Dr. and Mrs. Larry Hearn McCalla Professor of Chemistry at Wofford. "Trecy and his father are terrific supporters of this Interim. The first time David Watson was supposed to host a Wofford student, he got appendicitis right before Interim and had to cancel. Later he called and said, 'I feel like I got cheated. Would you be willing to let me arrange the rotations for the next Interim?' He's an incredible guy."

"Other Wofford graduates have hosted our students during the regular semester as well, for example Dr. Katherine Nicholson (Class of 1992) and Dr. Steve Richards (Class of 2008)," says Bass. "And one Interim Dr. David Dedmon (Class of 1978) mentored students then the students followed that up with a dental mission trip with Dr. Hitesh Tolani (Class of 2004). So many Wofford grads have been such a help to our students as they work to become dentists. There's no way to mention all who have participated or offered to participate, but I definitely want to acknowledge their support."

Dr. Lindsey Harper Moore, a 2001 graduate, inspired current junior Blakely Graham to begin her pre-dental studies at Wofford. Moore also has agreed to let Graham spent part of the month interning with her in Georgetown, S.C.
"Dr. Moore has been my role model," says Graham. "She was my dentist growing up, and when I told her I was interested in becoming a dentist as well, she gave me the opportunity to work with her." Graham also participated in South Carolina's Dental Access Day for additional hands-on experience.

"It was exhilarating. Working with people who had never been to the dentist before and reassuring them was one of the coolest things I've ever done," she says.

Sophomore Griffin Kimbrell became interested in the field when he watched his dad get implants. Tyriek Lyles, a junior, decided dentistry was right for him because he wants to make a positive impact on the healthcare of children. Ted Loper, a sophomore from Columbus, Ohio, is following in his father's footsteps, much like Watson.

These and other aspiring dentists will be studying for the DAT, dental admission test, and applying for dental schools at the end of the spring semester.