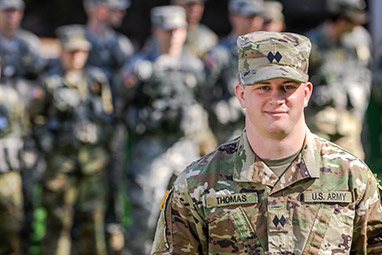 SPARTANBURG, S.C. – Despite being selected as one of the top 300 Army ROTC cadets in the nation and attending the George C. Marshall Leadership and Awards Seminar in February, Spencer Thomas ’17 still maintains that he’s just a normal student.

The English major from Chesnee, S.C., serves as the cadet battalion commander for Wofford College’s Southern Guard Battalion, providing guidance and vision to the development of the first-year, sophomore and junior cadets.

He was nominated as the battalion’s representative at the seminar based on his leadership position, his GPA, character and integrity.

“Spencer is currently rated as the top senior in the military science program based on his performance in leadership and academics at Cadet Summer Training during the summer of 2016 at Fort Knox, Ky.,” says Lt. Col. Albert Yonkovitz, professor of military science.

At the conference, Thomas spent three days in Fort Leavenworth, Kan., where he learned about national defense strategy, received leadership development training and listened to key speakers and current leadership of the Army.

“It was unreal for us [cadets] to get face-to-face contact with important people in the Army, people who we aspire to be,” says Thomas. Speakers included Col. Bruce Crandall, a Vietnam War veteran and Medal of Honor recipient; Gen. Robert Abrams, the commanding general of U.S. Army Forces Command; and Maj. Gen. Christopher Hughes, the commanding general of U.S. Army Cadet Command.

The major topics of discussion were inspirational leadership, exemplary leadership examples and mission command, which is the doctrine detailing how the Army should lead, disseminate information, and set goals and expectations. The seminar also focused on diversity and “the power of diversity, where the Army has often been ahead of the rest of society in terms of integrating the most diverse, the smartest and the most varied populace,” says Thomas.

Thomas will be commissioned as a second lieutenant in the U.S. Army on May 19 for a required eight-year commitment. As a Distinguished Military Graduate, a designation offered to the top 20 percent of new second lieutenants, Thomas received his top pick as an active duty soldier in the engineer branch.

“Spencer’s designation speaks to his character. He exemplifies the Army values on a daily basis through his presence and resilience, and he is committed to excelling,” says Yonkovitz. “He possesses a lot of integrity and is very empathetic in his understanding of others and issues that surround him.”

Thomas is grateful for the experience the seminar offered him, saying that ultimately it’s not for his benefit, but for the benefit of the soldiers for whom he will be responsible in the field.

“No organization invests into the development of its leadership like the U.S. Army, whether it be academically, technically or professionally,” he says. “I learned a lot about how to cultivate relationships with others in the platoon. These soldiers may have been deployed before, been in the Army for up to 15 years, and now I’m their boss so it’s important to know how to be their leader and how to build that trust.”

Thomas will complete an officer leadership course and learn the necessary engineering skills this summer at Fort Leonard Wood, Mo. He then will receive his first duty assignment and discover how he fits into the big picture.

“We might be helping to build a bridge or a dam for some community, and that may not sound very ‘Army’ or exciting, but it’s winning the hearts and minds of a populace, and it’s providing stability and security,” he says. “It’s my responsibility to do my part to serve in whatever tiny capacity I can. … It’s my duty.”