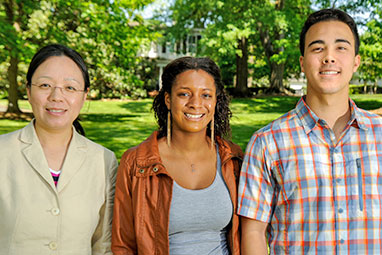 Simone Worthy, a Chinese major and with minors in economics and government from Stockbridge, Ga., has been awarded the Critical Language Scholarship from the U.S. Department of State. The highly competitive national scholarship will fund Worthy’s participation in an intensive, eight-week Chinese language living and learning experience, including a home stay, in Beijing, China. She leaves on June 19.

“I love languages, and I think it’s important to be a global citizen and to understand other people through their language and culture,” says Worthy, who will complete requirements for graduation in August and plans to study international trade and law.

It’s that attitude and a tireless work ethic, says Dr. Yongfang Zhang, assistant professor of Chinese, that helped make Worthy an excellent candidate for the CLS.

“Chinese can open so many doors, but students must be at a high level of proficiency to take advantage of that. With her extensive study and commitment to excellence, Simone has put herself in a position to succeed,” says Zhang.

Worthy spent a semester abroad in China and spent a summer in the Middlebury Chinese Language School. She also helped with Wofford’s StarTalk summer Chinese language program for high school students. In addition, she has studied Spanish for five years.

Worthy is the second Wofford student in the college’s Chinese program to receive this scholarship. WestLee Parker, Class of 2016, won the scholarship and spent eight weeks in China during the summer of 2014.

“We had a CLS scholar last year and got one again this year,” says Zhang. “We have a very strong Chinese program here, but opportunities like CLS also give students opportunities to study with others outside of Wofford. Building that network will help with a career.”

Every year, approximately 550 U.S. undergraduate and graduate students are selected for the CLS program to study Arabic, Azerbaijani, Bangla, Chinese, Hindi, Korean, Indonesian, Japanese, Persian, Punjabi, Russian, Turkish or Urdu languages. The program provides fully funded, group-based intensive language instruction and a cultural experience that is designed to promote a mutual understanding and respect between those from the U.S. and abroad.

By Kelsey Aylor, Wofford Class of 2017