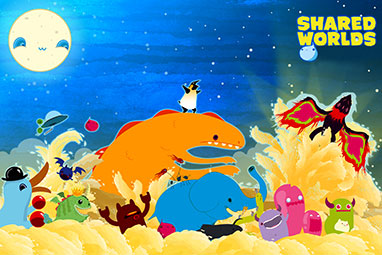 The unique summer camp for rising eighth- through 12th-graders will be held July 19 through Aug. 1 on Wofford’s campus. Registration is underway; for details, go to www.Wofford.edu/SharedWorlds. The program is in its eighth year.

Link, Valente, Byrne and VanderMeer will be joined by a variety of other authors and editors who will serve as instructors and mentors to the students. They include Nathan Balloingrud, David Anthony Durham, Gavin J. Grant, Will Hindmarch, Jeremy L.C. Jones and Ann VanderMeer.

Shared Worlds, which is sponsored in part by Amazon.com, takes an innovative approach to creative writing and thinking. Students participate in small groups in which they imagine and design a world. They then write fiction set in the worlds they have created. The objectives are to write good fiction, develop the skills necessary to work well in a group, and to realize a student’s full creative potential – -all in a safe and structured environment. “Kelly Link’s new collection ‘Get In Trouble’ recently was featured in the New York Times, and she is considered one of the best short story writers in America. Catherynne Valente is a New York Times bestselling author and a beloved fantasy author, and Monica Byrne has a North Carolina connection and her critically acclaimed first novel, ‘Girl in the Road,’ is out this spring,” Jeff VanderMeer, co-director of Shared Worlds, says. “They and the full complement of authors and editors joining us this summer will provide these students with a wealth of information and experiences they will never forget.”

VanderMeer’s own “Annihilation” was a Goodreads Reader’s Choice Award finalist and his “Southern Reach” trilogy made the New York Times bestseller lists last year and was on Entertainment Weekly’s Top 10 List for the best fiction of 2014.

Monica Byrne is a writer based in Durham, N.C., where she is a playwright in residence at Little Green Pig Theatrical Concern. Her first, critically acclaimed novel, “The Girl in the Road,” was published by Penguin Random House in 2014, and she’s also published essays and short stories in The Atlantic, Virginia Quarterly Review, WIRED, The Baffler, Glimmer Train and The Rumpus, among others. She holds degrees in biochemistry from Wellesley and MIT.

David Anthony Durham is a writer of historical and fantasy fiction whose first book, “Gabriel’s Story” was a New York Times Notable Book, a Los Angeles Times pick, and a Booklist Editor’s Choice. It won the 2001 First Novel Award from the American Library Association’s Black Caucus, the 2002 Alex Award and the 2002 Legacy Award in the Debut Fiction Category. His second and third novels garnered similar honors. Within fantasy, Durham is best-known for his “Acacia” trilogy, which made best of the year lists in Publisher’s Weekly, Kirkus Reviews and Fantasy Magazine and was a finalist for the Prix Imaginales in France. Durham writes for George R.R. Martin’s Wild Cards series of collaborative novels.

Gavin J. Grant is a fiction writer and co-founder of the award-winning Small Beer Press. Grant has been the co-editor of “Lady Churchill’s Rosebud Wristlet” since 1996 and from 2003 to 2008 was the co-editor of the “Year’s Best Fantasy and Horror” from St. Martin’s Press. With his wife, Kelly Link, he has edited two anthologies for young adults, “Steampunk!” and “Monstrous Affections.”

Kelly Link is the award-winning author of the collections “Stranger Things Happen,” “Magic for Beginners,” “Pretty Monsters” and the just-released “Get in Trouble.” She has received a grant from the National Endowment for the Arts. She and Gavin J. Grant have co-edited a number of anthologies. She is the co-founder of Small Beer Press and co-edits the occasional zine “Lady Churchill’s Rosebud Wristlet.”

Catherynne M. Valente is the New York Times bestselling author of over a dozen works of fiction and poetry, including “Palimpsest,” the Orphan’s Tales series, “Deathless” and the crowdfunded phenomenon “The Girl Who Circumnavigated Fairyland in a Ship of Own Making.” She is the winner of the Andre Norton, Tiptree, Mythopoeic, Rhysling, Lambda, Locus and Hugo awards. She has been a finalist for the Nebula and World Fantasy Awards. She lives on an island off the coast of Maine with a small but growing menagerie of beasts, some of which are human.

Ann VanderMeer serves as an acquiring fiction editor for Tor.com, Cheeky Frawg Books, and Weirdfictionreview.com. She was the editor-in-chief for “Weird Tales” for five years, nominated three times for the Hugo Award, winning one. Along with multiple nominations for the Shirley Jackson Award, she has won a World Fantasy Award and a British Fantasy Award for co-editing “The Weird.” Other projects have included “Best American Fantasy,” three Steampunk anthologies, and a humor book, “The Kosher Guide to Imaginary Animals.” Her latest anthologies are “The Time Traveler’s Almanac,” “Sisters of the Revolution” and “The Bestiary.”

Returning to Shared Worlds are:

Jeremy L.C. Jones is a freelance writer, editor and teacher. Jones writes for newspapers, magazines and websites and is the staff interviewer for the Hugo Award-winning Clarkesworld Magazine. He is also the editor of two series of western novels that debut in 2014, the Piccadilly Doubles series from Piccadilly Publishing, the Fight Card Charity anthologies (co-edited with Paul Bishop), and the Western Fictioneers Storytellers series (co-edit with Troy D. Smith). Jones is the founder and co-director of Shared Worlds.

Jeff VanderMeer’s New York Times-bestselling Southern Reach Trilogy (“Annihilation,” “Authority” and “Acceptance”) made Entertainment Weekly’s To 10 Best Fiction Books of 2014, among many other best-of lists. The novels have been optioned by Scott Rudin and Paramount Pictures, with Alex Garland attached to write and direct. The trilogy has also been translated into 20 languages. VanderMeer writes nonfiction for The New York Times, the Los Angeles Times, The Atlantic’s website, and The Guardian, among others. He is also the author of “Wonderbook: The Illustrated Guide to Creating Imaginative Fiction” and serves as co-director of Shared Worlds.

Will Hindmarch is a freelance writer and designer with numerous professional credits as author, developer, producer and graphic designer on games, books and magazines, some of them electronic. In the gaming industry, he has worked for White Wolf Game Studio, serving as the developer of the flagship World of Darkness Storytelling Game, Vampire: The Requiem, and he has written or designed numerous game titles for Pelgrane Press, Fantasy Flight Games and Atlas Games. He co-produces the live-lit storytelling show, Story Club South Side, and is a designer and adviser at Protagonist Labs. Hindmarch has been a part of Shared Worlds since 2008 and recently has been appointed the assistant director.

Nathan Ballingrud’s first collection of stories, “North American Lake Monsters,” came out in the summer of 2013. Several of the stories have been reprinted in Year’s Best anthologies. One of them, called “The Monsters of Heaven,” won a Shirley Jackson Award. He is a regular at Shared Worlds.