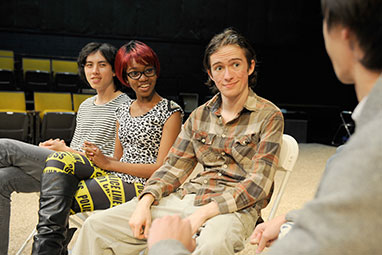 When Ed and his three adult sons come together to celebrate Christmas, they enjoy cheerful trash talking, pranks and takeout Chinese. Then they confront a problem that even their "happy family" can’t ignore: when identity matters, and privilege is problematic, what is the value of being a straight white man?

That's the story that the Wofford College Theatre Department will share during Young Jean Lee’s ‘Straight White Men.’ Performances will run November 5-7 and 11-14 at 8 p.m., in the Tony White Theater in the Campus Life Building. Purchase tickets at www.wofford.edu/boxoffice/.

According to the New York Times, Lee is "the most adventurous downtown playwright of her generation" and Time Out New York calls her "one of the best experimental playwrights in America."

Dan Day, Wofford assistant professor of theatre, calls 'Straight White Men' “both an aggressive and timely exploration of patriarchy, privilege and sexual identity, and a hilarious comedy with a surprisingly compassionate heart.”

The play premiered this past April and ended its European tour on October 17. Wofford’s production of the play will be the first production in the southeast, despite intense demand for the rights to perform ‘Straight White Men,’ says Day.

“One of the things that excites me the most about this project is how timely and immediate it is. The students are thinking about, exploring and embodying some of the most important issues and ideas of our current moment,” says Day. “[The students’] bold work and this challenging play will generate thought, discussion and maybe even some controversy. To me, this is an essential component of a liberal arts education at Wofford College.”

Mike Hoffman, Wofford Class of 2018, is playing Ed Norton, the elderly father of the three other men in the play.
"The most challenging part for me has been how to become an older person physically," says Hoffman. "I can learn how a person’s beliefs and experiences affect him later in life, but changing how you move is so very difficult.”

For Hoffman, ‘Straight White Men’ is an important play for Wofford students and the Spartanburg community to see.

“It asks a lot of important questions about a group that isn't frequently thought about, of course, straight white men," says Hoffman. "It doesn’t seek to condemn anyone, but it forces us all to step back and look at who we are as straight white men, and I’ve personally never been called on to do that before.”