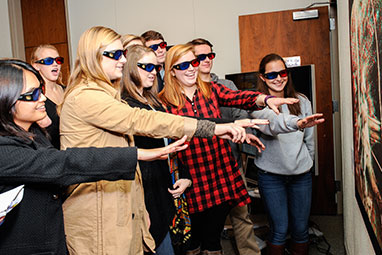 “You are viewing a technology that, while it appears today to be a novelty, was for a time as popular as TV or film,” said Dr. Kim Rostan during the December opening of her students’ exhibit sharing stereographic images and technology that are more than a century old. “Millions of these images were sold every year during the mid-1800s and early 1900s.”

Rostan’s students rediscovered these images within Wofford’s Sandor Teszler Library special collections, and turned them into an exhibit, “Optics Wonders,” now on display in the library gallery. The exhibit, which will run through Feb. 26, is free and open to the public.

According to Rostan, associate professor of English at Wofford, her first-year humanities class searched through more than 500 stereographs before selecting a group to show. They then curated the exhibit with the help of Luke Meagher, special collections librarian; Youmi Efurd, curator and cultural arts coordinator; and Kevin Reynolds, dean of the library. Students in “The Photographed World” class also learned about art criticism and analysis during the semester.

“I chose to take this course because I really like the idea of analyzing photos for more than what’s on the surface,” says Kathryn Whilden, a first-year student from Myrtle Beach, S.C. “I’ve never taken any photography classes before, but it has been really informative and interesting to learn analytical terms and how to view things from different perspectives.”

The stereographs selected for the show feature both landscapes and portraits. The stereoscope, a small headset-viewer introduced to the public at the 1851 Crystal Palace Exhibition in London, mimics the brain’s ability to combine different perspectives from left and right eyes to perceive depth. Stereoscopes allow for 3D views that give the illusion of immersion in a scene. Viewers in the 19th and 20th centuries found themselves transported to faraway locales, luxurious palace interiors and modern industrial sites. In this exhibition, images from stereographs held in Special Collections are enlarged 1,200 percent and converted into anaglyph 3D, viewable with the red-and-blue-lensed glasses provided.

“The stereoscope is really just replicating what our brains naturally do so elegantly,” says Rostan.

The personal favorite of Anna Lee Schneider, a first-year student from Hoover, Ala., features a couple captured in an intimate moment.

“The image is called Fishing Smack, and I really enjoyed it because it’s cute but also has an interesting history and alternate meaning,” says Schneider. “The couple is kissing, which when this image was first produced, would have been considered risqué. Now it’s very romantic. The couple is at a pond or lake fishing for love.”

Whilden's favorite is the stereograph of a pineapple.

“This image has a very prominent 3D aspect to it. It also is one of the clearest,” she says. “The effect is really amazing to see once it has been blown up.”

Once the class selected their final images Meagher digitized them, blew them up and made them 3D so that the audience could use cyan and red glasses to enhance their experience. The exhibit provides viewers with a hands-on experience complete with 3D glasses and stereograph viewers.

Rostan is pleased with her student's accomplishments.

“They’ve worked really hard, and it’s rewarding to see their work come to fruition,” she says. “Ultimately, one of the most exciting aspects, from my perspective as a humanities teacher, is the fact that this technology fundamentally demonstrates how multiple perspectives are necessary to achieve depth, an idea that a liberal arts institution also puts forth. This is something that I had believed to be true all along.”