Why Do We Dig? by Phifer Nicholson, Wofford Class of 2016 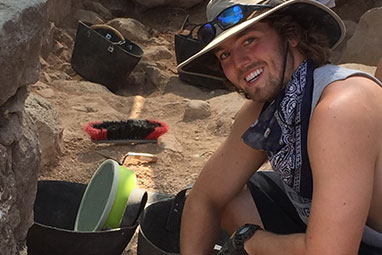 Five Wofford College students, a recent Wofford graduate and Dr. Byron McCane, Albert C. Outler Professor of Religion at the college, have been working a dig at the Horvat Kur synagogue excavation site (dating to the Byzantine period), located on a hilltop a few kilometers from the northwestern shore of the Sea of Galilee. They are in Israel as part of the Kinneret Regional Project, an international research consortium sponsored by Wofford College, University of Bern (Switzerland), University of Helsinki (Finland) and Leiden University (The Netherlands). One of the students, Phifer Nicholson, a member of the Wofford Class of 2016 from Plymouth, Minn., wrote this journal entry about the experience.

Why Do We Dig?

On this dig, we found oil lamps, thousands of pottery sherds and a beautiful mosaic. With every stroke of our trowel, we traveled back almost 2000 years.

We found a lot of walls, which were built to support, and also to separate the inside from the outside and even the holy from the mundane.

Today there are walls in Israel. One of them, the Western Wall in Jerusalem, is a symbol of Jewish history. It happens to be located very close to Haram al-Sharif, which is just as important in Islamic belief and practice. The result is a complicated, contentious history, which we saw with our own eyes and felt in our own hearts when we visited. Today the tension is fueled by radical voices from both sides, which (sadly) are the loudest right now.

Another wall stands between Israel and the Palestinian West Bank. This wall has stopped suicide bombings, but it also has created a problem with lasting ramifications — the almost complete separation of Israelis from Palestinians. With each year that passes, memories of past friendships fade, and people on both sides take a few more steps toward becoming the “other.”

So our trip juxtaposed the ancient and the modern. Now as then, people build walls. In our era of globalization, differences are meeting, and walls are being built. Should these walls come down? If so, how? In light of the mistakes we have made in the past, where is the path forward?

We have to keep digging.