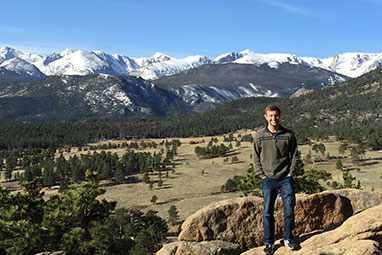 SPARTANBURG, S.C. – Wofford College student-athlete Justin Whitaker ’15 is the 2015 recipient of the Dave Hart Graduate Scholarship and was honored along with nine other Southern Conference athletes at the SoCon Honors Dinner in Hilton Head Island, S.C., on May 27. This award is not the only award that Whitaker, a member of both the Wofford cross country and track and field teams, has been awarded in the past year.

The Barry Goldwater Scholarship Foundation named Whitaker an honorable mention finalist in March of 2014, and in March of 2015 he was given honorable mention recognition from the National Science Foundation’s Graduate Research Fellowship Program. The NSF Graduate Research Fellowship award is a competitive fellowship given to students pursuing graduate degrees in the sciences. For college student applicants to receive the award, they have to compete against first-year graduate students who are often required to apply for the fellowship during a proposal or grant-writing course. This year the NSF received more than 16,000 applications and awarded just 2,000 fellowships; another 2,000 students were named honorable mentions.

The Dave Hart Graduate Scholarship is awarded based on academic performance, athletic performance and community service. Whitaker has been a part of two college records in track — running legs of the Terriers’ record-setting 4x400-meter relay in the 2014 outdoor season and the distance medley relay at the 2014 SoCon Indoor Track and Field Championships. Whitaker, who aspires to become a meteorologist, is double-majoring in physics and mathematics and holds a 4.0 GPA. He was elected to the Phi Beta Kappa honor society in 2014 and was one of three honor graduates recognized at Wofford’s May 17 Commencement for the highest GPAs of graduating seniors.

“From my time as a student-athlete at Wofford, I’ve learned the importance of time management, discipline and commitment,” says Whitaker. “These traits have been important as both an athlete and an academic, and I’m so thankful to have been named a Southern Conference Graduate Scholar and an honorable mention for the National Science Foundation Graduate Fellowship.”

Whitaker also has earned an American Meteorological Society Named Scholarship and was a CoSIDA Academic All-District IV selection in 2014. An active member of Wofford's Student-Athlete Advisory Committee, Whitaker has mentored autistic children and served as a teacher's aide at McCarthy Teszler School, a school in Spartanburg, S.C., for children with special needs. Whitaker, who has had weather-related internships with CBS Atlanta, Texas A&M and Penn State, will be attending Colorado State University to pursue a Ph.D. in atmospheric science (full tuition paid with a stipend). “The research that I will be doing at CSU will focus on tropical meteorology, in particular investigating hurricane genesis,” says Whitaker. “I am honored to represent Wofford at one of the top atmospheric science graduate programs in the country, and I’m excited to start this new chapter of my life!”