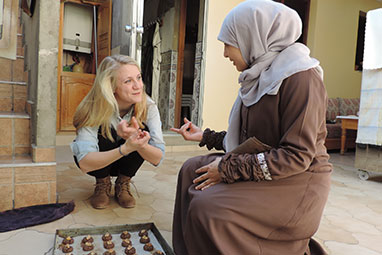 SPARTANBURG, S.C. – Again this year, the Open Doors 2015 report issued by the Institute of International Education has recognized Wofford College as a national leader in study abroad participation. Wofford holds the #6 spot on the 2015 list and has been in the top 10 baccalaureate institutions for the percentage of students studying abroad for credit for 20 years.

Brie White, a Wofford junior English major from Columbia, S.C., has been studying abroad in Melbourne, Australia, for the fall semester. Preparing to return home in a few weeks, she shared this in the Old Gold & Black student newspaper:

“I’ve experienced so much while I’ve been in Australia.... I've consistently navigated and used public transportation, something I’d never done previously. I took a selfie with a kangaroo. I made lifelong friends. I had to accept the truth that you cannot and will not get along with everyone. I was exposed to a very different form of government and type of health care system. I took classes that we extraordinarily different than anything Wofford has. I stood on the soil of three different countries,” White wrote. “These five months have provided me with a lifetime of lovely and tiresome and beautiful and difficult experiences.... Soon I will be back to what I know; however, now I know a lot more.”

“Study abroad fosters opportunities for growth in intercultural competencies and creates a space for cross-cultural exchange. Through creating globally educated students, we aim to meet the college's mission of preparing them 'for extraordinary and positive contributions to society.’ Especially in tumultuous times, this mission rings true,” says Amy Lancaster, dean of international programs.”

The majority of Wofford’s study abroad participants this year will study overseas during the January Interim. The Interim is the reason that Wofford also ranked #15 on the list of colleges that offer short-term opportunities for study abroad experiences.

“We have students studying across the globe in January, including faculty-led opportunities to explore the history, culture and economies of Cuba, Greece, India, England, China, Italy, the Caribbean, Belize, South Africa, Ireland, Australia and New Zealand,” says Amy Lancaster, dean of international programs. “These types of experiences are essential in developing cross-cultural awareness, adaptability, independence and problem solving — skills that will prove vital to our students in the workplace and in their personal lives.”

Wofford College is committed to providing students with a global learning experience, regardless of their field of study, socioeconomic background or athletics or co-curricular activities. Over the past three year, an average of 64 percent of Wofford students received academic credit for studying abroad at least once during their undergraduate experience. Since 2007, Wofford students have studied abroad in 70 countries on all 7 continents.

“Wofford encourages and assists students wishing to study abroad through a variety of scholarships and travel grants, both need and merit-based,” says Lancaster. “It’s a part of who we are as a college, and we’re determined to make these transformative experiences accessible to all of our students.”