Students to pitch ideas for chance at $20,000 in cash, services 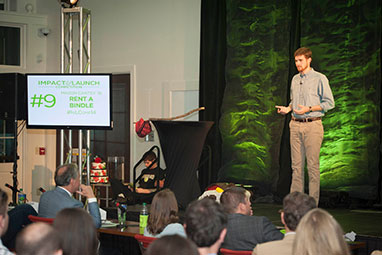 A student participates in the 2014 Impact and Launch Competition at Wofford. This year's event will be held Saturday, March 28.
2015-03-02

SPARTANBURG, S.C. – Wofford College announces 10 students who will pitch their businesses and community impact projects to a panel of judges during its third annual Impact & Launch Competition on Saturday, March 28. At stake is $20,000 in cash and services furnished by the college and event sponsors.

The Impact & Launch Competition will take place from 5 to 9:30 p.m. in the Michael S. Brown Village Center on Wofford’s campus. The evening will include finalist pitches in front of a live panel of judges, a dinner and the winner reveal at the end of the evening. The free admission event is open to the public.

“The students pitching in the competition are committed to making an impact on their communities through entrepreneurship,” says Courtney Shelton, director of the Impact and Launch programs housed in The Space in The Mungo Center, Wofford’s professional development program. “Entrepreneurs are experts at seeing a problem and taking on the risks and hard work that go into solving it. Even if these students aren’t eventually employed by their own businesses or projects, by learning entrepreneurial skills, they’ll become better citizens, better leaders and better professionals no matter what they do after graduation.”

Wofford’s Impact and Launch programs offer scholarships to students who want to learn entrepreneurship skills through the Impact track, which promotes social-good projects and non-profit businesses, or through the Launch track, where students start and run a for-profit business. Both four-year programs are open to students of all majors and emphasize real-world, hands-on learning.

Farah Kindergarten will bring a non-profit kindergarten to underprivileged children in Kabul, Afghanistan. Farahnaz A., a first-year student from Burlington, Vt., and Afghanistan native who uses an assumed name to protect her identity and the safety of her family, created the project to make a difference in the lives of children living in “one of the world’s most dangerous places to be a child.”

Get Moving Campaign targets elementary school children in low-income areas and encourages them to lead a healthy lifestyle and improve self-esteem before transitioning to middle school. Three students manage the project: Chandler Washburn, a first-year student from Brentwood, Tenn., who has not declared a major; Parker Johnson, a senior history major from Raleigh, N.C.; and Stacey Mangan, a senior history and Spanish major from China Grove, N.C.

Wofford Artisan Market brings student-made art and goods to the local community via a product blog and by organizing product sales opportunities on campus and at the local Hub City farmer’s market. The project is managed by two senior art history majors, Sarah Baldwin of Chapin, S.C., and Mills Brown of Florence, S.C.

Wee Celebrations offers “set up to clean up” services for children’s birthday parties and corporate events. The business started after sophomore founder Victoria Biggers, a business economics major from Clover, S.C., came to the aid of a stressed neighbor planning her daughter’s ninth birthday party.

Bridge Books is a series of print and electronic children's books written in English with side-by-side French, Mandarin, Spanish and Russian translations. These bilingual books help children in a variety of countries enjoy learning a second language. An app also is available to provide a clickable translation of each text. Taylor Leaphart, a first-year student from Gilbert, S.C., founded Bridge Books.

The registration deadline is Tuesday, March 24.

The Space in The Mungo Center was founded in 2010 to give Wofford students advanced preparation in the professional skills and real-world experiences valued by employers and graduate schools. The Space includes five programs offering hands-on learning opportunities in career development, internships, social entrepreneurship, entrepreneurship and consulting. The Mungo Center is named for Steven and Stewart Mungo, principals in The Mungo Companies, named one of America’s Best Builders by Builder Magazine for 2012. Stewart Mungo is a 1974 graduate of the college and a former member of Wofford’s Board of Trustees. Steven Mungo is a 1981 Wofford graduate and a member of the Wofford President’s Advisory Council.