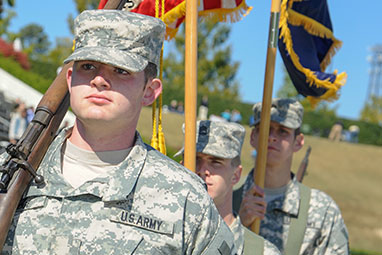 A message from Wofford's president:

As America prepares to salute our veterans, we at Wofford College remember all veterans, especially those in the Wofford family who have served our country (both at home and abroad), those currently serving and those who are on campus right now preparing for lives of leadership and service through the military.

A group of Wofford students formed the Southern Guard Battalion as a volunteer infantry company in the 1850s, not long after the college was founded. After World War I, Wofford was one of the first colleges to secure a unit of the Reserve Officer Training Corps (ROTC). The battalion was formally established on Oct. 18, 1919, with 118 members. The late Olin D. Johnston ’21, who went on to serve as governor of South Carolina and as a U.S. Senator, was the first battalion commander.

Today, Wofford cadets still take classes in Main Building. They still train, wear their uniforms on campus and earn their commissions during Commencement weekend. Watching them receive their first salute remains a meaningful and touching part of the Wofford experience.

This year, in honor of Veteran's Day, I'd like to share a story (below) about current Wofford cadet Timothy Edge ’17 written by another Wofford student, Kelsey Aylor ’18. Both make us proud.

In the line of fire

“A nation that distinguishes its scholars from warriors will soon find its decisions made by cowards and wars fought by fools.” Thucydides

Cadet Timothy Edge ’17, a government major from Gaffney, S.C., provides an outstanding example of why.

For Edge, a member of the Southern Guard Battalion, work doesn’t stop on the weekends. On top of his schoolwork and ROTC commitments, Edge returns home to Gaffney every weekend to volunteer with the Grassy Pond Fire Department. Edge joined the volunteer service shortly after his family’s move to Gaffney. On free days, he works with AmbuStar, a company that provides EMS services for Cherokee, Union and Spartanburg counties.

Edge began training when he was 17 and has been working for two years.

“I took training in-house because that fit best with my schedule. There are classes in basic and advanced firefighting, different aspects of truck operation and basic emergency medical responder knowledge,” says Edge.

According to Edge, the Grassy Pond department receives about 350 calls a year, the majority of which are medical calls or motor vehicle accidents. The department covers 32 square miles and covers a seven-mile stretch of I-85.

“One of the most memorable calls I responded to was for a structure fire in the city of Gaffney,” says Edge. “It was Christmas Day in 2013, and while we were responding, a ceiling came down on the crew I was with.”

Recently, Edge was featured in a photo on the front page of the Gaffney Ledger newspaper for his assistance at the scene of a two-car collision.

“A pickup truck had been overturned in the collision, and we had to extricate the driver. He was trapped in the seatbelt and had some injuries on his left side,” says Edge. “We pulled the roof back off the truck and worked alongside the medics to free and stabilize him.”

It’s just another day preparing to be in the line of fire for Edge, a contracted cadet with Wofford’s ROTC battalion. In return for a scholarship, he has made a minimum eight-year service commitment to the Army following graduation. Edge hopes that during his career in the Army and beyond, he can continue to work as a fire and medical responder.

“I really do enjoy the fire service, and I enjoy the EMS side of rescue as well," he says. “Wherever I end up living in the future, I hope there is a volunteer service so that I can become involved with it and with EMS, preferably at the supervisor level.”

For now, Edge continues to put academics first, knowing that his placement in the Army depends largely on his Wofford GPA.

Edge received the Rookie of the Year award in 2013 for his work with the fire service and says that he is grateful to participate in something he enjoys.

“The big takeaway from my time with the fire service goes into managing yourself in awkward or uncomfortable situations and seeing how supervisors manage things,” says Edge. “Whenever I’m with EMS, I ride with the supervisor, and I’m able to see somebody in real time managing three or four different things going on at once, between phone calls and radio traffic. It’s a teachable moment that I feel ties back into and benefits both the academic and military side of my life as well.”

“Timothy Edge is not only a good cadet, but a great young man. He chooses to spend his free time in Gaffney, pulling people out of burning cars, which speaks so much about his character,” says Stricklen. “He exemplifies the characteristics I expect out of my cadet corps – loyalty, duty, respect, selfless service, honor, integrity and personal courage. If we had a few more people like him, the world might be a little bit better. And that speaks to the Wofford brand, too. We have students who are engaged locally and globally, who are trying to help others.... I think you need to have a liberal arts-educated officer corps in order to provide that well-rounded voice and leadership.”

To honor Wofford College alumni and veterans, the Southern Guards helped organize the Upstate Veteran Stand Down on Oct. 22. The event supports services for veterans such as a career fair, transition housing and VA medical consultations for homeless veterans. The Wofford battalion also will participate in Spartanburg’s local Veteran’s Day parade on Nov. 11 as well as Wofford’s Salute to Service football game on Nov. 21.

“For this football game, Furman’s ROTC cadets will run the game ball from their campus to the Spartanburg County line. Afterward, the Southern Guards will run the ball from the county line to the stadium in order to commemorate the service of our veterans and current active-duty soldiers,” says Stricklen, who hopes this tradition continues in future years.