Their World at Wofford: Teach For America 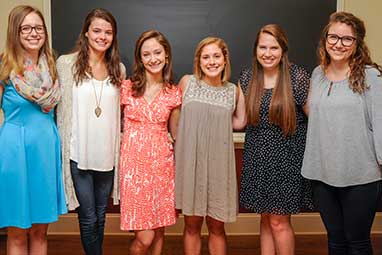 Wofford seniors, from left, Margaret Carraway, Zoe Paist, Anna Henson, Maggie Stroud, Kirsten Frost and Taylor Brown, will be teaching in low-income communities this fall as part of the Teach For America program.
2015-04-28

SPARTANBURG, S.C. – Kirsten Frost, a senior at Wofford College, was working with an AmeriCorps program designed to help prevent a loss in educational gains or “summer slide” in school-aged children when she learned that some states decide how many prison cells to build based on the number of third-grade students behind in reading.

She was so appalled that she applied to Teach For America, a national program that works toward educational equity by putting committed teachers into schools within low-income communities.

She’s not alone. This year five other Wofford seniors have joined the effort: Taylor Brown, a government and history major from Apex, N.C., will teach middle school mathematics in eastern North Carolina. Margaret Carraway, a history major with an art history minor from Tampa, Fla., will teach secondary social studies in Alabama. Anna Henson, a psychology major from Darlington, S.C., has been assigned to an elementary school in Mississippi. Zoe Paist, a biology and mathematics major from Hickory, N.C., will teach high school mathematics in eastern North Carolina. Maggie Stroud, a biology major with a business minor from government Chapin, S.C., will be placed in a secondary science classroom in South Carolina, and Frost, a government and Spanish major with a concentration in Latin American and Caribbean Studies from Sumter, S.C., will teach special education, also in South Carolina.

“We all care about the cause – bridging the achievement gap and fighting for equality of opportunity,” Stroud says. “I believe that the best way to do that is through achieving educational equity.”

According to Sam Clowney, a 2001 Wofford graduate and director of teacher leadership development for Teach For America in Charlotte, N.C., Wofford students are ideally suited for the program.
“Each year we have tens of thousands of applications, and we only accept three or four thousand,” Clowney says. “We get the cream of the crop, and Wofford students definitely hold their own against anyone from any college or university in the country.”

Clowney says that’s because Wofford builds civic engagement into its mission – from the Bonner Scholars, to Arcadia Volunteer Corps, to classes with a service-learning component, to fraternities and sororities that support national and local philanthropies. “Wofford creates an environment that helps students understand the importance of civic engagement and develop a deep commitment to it,” he says. “Service is a big part of life at Wofford, and because of that, Wofford students make ideal Teach For America leaders.”

Henson says that nothing makes her heart beat faster than the possibility of educational equity. She came to Wofford convinced that she would never teach. Then Dr. Tim Schmitz, associate professor of history, asked the question – To whom do you owe your success? – in her Western Civilization class.

“I’m from a loving, comfortable, middle-class home,” Henson says. “I benefited from good parents and motivated teachers. Not everyone has that type of support. Dr. Schmitz’s class changed my perspective. Teach For America is an opportunity to serve and give back in a community like my hometown.”

Upon graduation these Wofford women, all with resumes filled with study-abroad, internship, leadership and service experiences, will spend five weeks completing an intensive training program and working in a summer school alongside certified teachers. They will begin their two-year commitments in high-need classrooms in the fall.

“I expect to see anything and everything,” Stroud says. “I expect to have my heart broken, my blood boiling and ultimately, my world rocked.”

“I expect to be surprised at what my students are capable of,” Frost says.

“I’ve been told not to smile until Christmas,” says Carraway, who plans to use her two years in the program to earn a master’s degree in education. She’s particularly excited about her assignment to rural Alabama because her grandmother was a teacher in a low-income area of the state. “It’s a family legacy,” she says.

“My goal is to be effective, and if I’m not an effective teacher, then I will find another way to help this cause,” Stroud adds. Sitting in a group in a classroom in Main Building, they all nod their heads in agreement. Whether in the classroom or eventually shaping public policy, these women believe in Teach For America.

“Crime, poverty, the government, the economy… we complain about these problems that could be solved if we root the solution in education,” Frost says.

Wofford’s Teach For America students have felt supported by the Wofford community –professors who have passed along applications, written letters of recommendation and shared personal experiences – but most also have received concern from someone in their lives, people who mean well but are concerned that these newly minted graduates are going into tough situations blinded by idealism.

In addition to having 2014 Wofford graduate Kalle Davis, currently a Teach For America Spanish teacher in North Carolina, as a resource, Henson has been sharing her insights with the group after her internship with Teach For America this past summer as the operations coordinator in Atlanta.

“We know it’s going to be hard, but I believe we’re all going into this with an open mind,” Henson says. “We have degrees from Wofford College. We can do anything, and we’re choosing to do this. If not us, then who?”