The tools to thrive 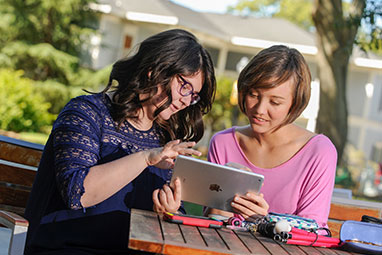 Diagnosed with optic nerve atrophy at 18 months, Sohm says she was treated as normally as possible by her parents, and just told to do her best.

Her best meant earning a $10,000 scholarship from the Lighthouse Guild and additional scholarships from Wofford College, the state of South Carolina, the South Carolina State Fair and the Orangeburg County Chamber of Commerce. She graduated at the top of her class from Holly Hill Academy and completed a weeklong summer engineering camp for high school students who are blind or have low-vision.

“I get digital copies of textbooks, and I use an iPad, but I also have some really basic magnifiers. I use my iPhone, laptop, a specialized webcam and talking calculator,” says Sohm, who gets special seating in class and qualifies for extra time to test. "I usually don't require it, though," she says.

The South Carolina Commission for the Blind also helped her develop a set of tools that will help her thrive on Wofford's campus. Now halfway through her first semester, Sohm says she loves her classes and is looking forward to becoming more and more involved – especially within the physics department.

“A high school physics teacher inspired me to love science and learning. Our class had such fun projects, and physics is so practical and applicable. It’s the science of life,” she says.

Holly Stevens, a Wofford sophomore, is also legally blind. A native of Marion, N.C., she is triple majoring in economics, finance and Spanish.

Stevens was diagnosed with a brain tumor on her optic nerve when she was six months old. Two years and 24 rounds of chemo later, she was cancer free but had limited vision.

“I use electronic copies of textbooks so they’re easier for me to magnify, and I have a pair of very thick reading glasses that are basically magnifying glasses. I have a little device called a mini Ruby – it’s closed circuit television. For example, I can put it next to a word and enlarge a label, etc. It’s really helpful for grocery shopping and reading,” says Stevens.

Originally, Stevens says she was drawn to a college in North Carolina where a friend who is also legally blind had a good experience.

“I applied to Wofford on a whim and was blown away by the scholarships I got," she says. "I realized Wofford had everything I wanted.”

According to Stevens, the college provides accommodations in seating, enlarged copies of handouts, emailed copies of notes and presentations, and due to eyestrain headaches – especially when looking at numbers for too long – she receives extended time on tests and projects if necessary.

“Oftentimes, because blindness is uncommon, it’s hard for schools to know how to help. You have to know what you need, and I’ve learned that the hard way. I’m still learning what accommodations I need,” she says. “Because Wofford is a small college and so personal, I think people here are more willing to learn and to accommodate me, partly because they do that for everyone.”

Both Stevens and Sohm have learned to make the best of their vision challenges, and both say that while they have to be accepting of their blindness in order to best manage it, they also have to have an attitude that propels them forward despite their hindrances.

“It doesn’t really matter that you’re blind. It really matters what attitude you have in conquering obstacles,” says Sohm. “You really have to have faith in yourself that you can do it.”