Tens of thousands of downloads and counting 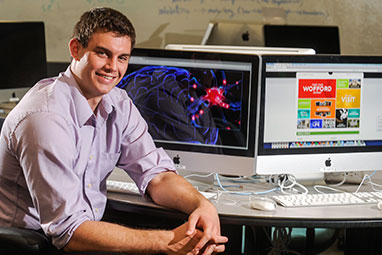 In the world of cancer research, the name Cody Watson (a 2015 graduate of Wofford College from Libertyville, Ill.) may not draw lots of attention, but the medical technology software he created last summer as a Papadopoulos Scholar has.

While interning with Fox Chase Cancer Center in Philadelphia, Watson wrote the code for PyMethyl, described on the Python Software Foundation website as “a quick and dirty way to find methylation patterns within the human genome.” It’s now been downloaded tens of thousands of times in labs around the globe.

According to Watson, the software serves as a pattern-matching algorithm between two known sets of human genomes, then looks for areas of hypermethylation to see how the expression of genes affects breast cancer.

“My algorithm found these different areas of expression between the two groups by doing a global-wide search for differences and then comparing the different areas of methlyation to the government database for genes,” says Watson. “After this we then knew what specific genes were involved.”

Watson says that the software can be used for comparing any type of data — methylation data, sequence data, viral DNA, bacterial DNA, protein combining to the DNA as well as any other type of data that can be tagged on a human DNA or RNA sequence.

Watson, a biology and computer science double major with an emphasis in computational science and a minor in mathematics, gravitated toward computers after deciding early in his college career that he did not want to become a doctor. His internships in the field of computational science reinforced the decision. Now he is making plans to begin a Ph.D. program in computer science at the College of William & Mary in the fall. He received a full scholarship plus stipend. Eventually he sees himself working in either computer security or computational biology, including nanobot technology or neurobiology. Watson says that if he pursues computer security he could work for the NSA, FBI, CIA, etc., and if he pursues computational biology he will most likely work for a biotech company working in medical technology.

As he plans to move to Williamsburg, Va., Watson is working in the Wofford IT department. He also is preparing for a wedding. In early August, he and Laura Settle will be married. He says she, retired Wofford professors Drs. Angela and George Shiflet, and Wofford computer science professors Dr. Dave Sykes and Dr. Joe Sloan provided a great support system. He also credits his parents, Mark and Roberta Watson, with giving him a foundation for success.

“Neither of my parents went to college, but they’ve always been my biggest supporters,” he says. “The Papadopoulos Scholar program at Wofford completely altered my career path for the better. I would not have had the opportunities I had or any idea of what I was capable of without the experiences that the Papadopoulos Scholarship offered.”

Dr. Gus (Wofford Class of 1954) and Maria Papadopoulos of Houston, Texas, established the Papadopoulos Scholar endowment in 2007. The fund provides internship opportunities for students with a strong interest in cutting edge research, particularly in the fields of nanotechnology, computational science, biology, chemistry or any field that promotes future advances in human knowledge. Past Papadopoulos Scholars have studied with the European Bioinformatics Institute in Cambridge, England; the Fox Chase Breast Cancer Research Laboratory in Philadelphia, Pa.; the Lawrence Livermore National Laboratory in Livermore, Calif.; the University of Bath in England; Vanderbilt Medical School in Nashville, Tenn.; and the Systems Biology Institute in Seattle, Wash., among others.