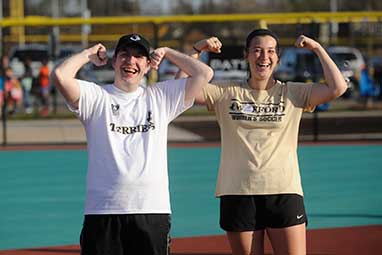 SPARTANBURG, S.C. – Micah Randall loves playing baseball, but she loves her Wofford buddy even more. Standing just behind the second base line holding hands with Mary Beth Bleekrode, a junior student-athlete on the Wofford College women’s soccer team who is majoring in biology, Micah is all smiles, and she’s not the only one.

Micah’s Miracle League baseball team – appropriately outfitted as the Terriers – covers the specially designed field with grins. This week the buddies are from the Wofford women’s golf, soccer and volleyball teams, and their smiles mirror the joy of their Miracle League players.

“My little girl loved every second of it, and so did I,” says Bella Santoro, a first-year student who is an outside hitter on the college’s volleyball team. This was Santoro’s first Miracle League volunteer experience. “I’ll absolutely do it again,” says the business major.

Emily Pagrabs, a junior student-athlete on the women’s golf team, understands the feeling. She has served as a Miracle League buddy four times. Pagrabs is majoring in history, government and French with a minor in business.

“I keep coming back because it’s fun,” she says. “It’s cool that we have this special facility and this awesome opportunity to make a difference so close to Wofford.”

The special facility is about a 10-minute drive from the college. According to Pam Dean, co-founder of the Carolina Miracle League and the current executive director, the field was custom-made of rubber for the safety of the special athletes, and Lenny Mathis, Wofford’s assistant athletics director for marketing and promotions, played a pivotal role in the field’s construction and the league’s success.

“Rolling wheel chairs through the dirt and over the bases was a mess,” Dean says. “We needed a rubber surface, and we needed someone with Lenny’s creativity to help us get what we needed. He’s brilliant.”

Mathis was the general manager of the Spartanburg Stingers minor league team that played at Duncan Park when he first met Dean.

“Pam left me this rambling voice message saying that she wanted to have children with special needs play before a Stingers game. She also had a videotape she wanted to show me about the beginning of Miracle League baseball in the Atlanta area. After I watched the video, I said, ‘Just tell me what you want me to do.’”

Mathis has been hooked ever since, writing press releases for the group, helping raise money, serving on the board of directors and even announcing during the games or tossing pitches when needed.

According to Dean, Mathis recruited local college students as buddies to ensure player safety and to offer friendship and socialization. He encouraged local colleges to lend their names and mascots to the Miracle League teams as well. The 120 Miracle League players now represent, in addition to the Wofford Terriers, the Spartanburg Methodist College Pioneers, the Converse College Valkyries, the University of South Carolina Upstate Spartans, the Limestone College Saints, VCOM (Edward Via College of Osteopathic Medicine), Clemson Life and the North Greenville University Crusaders.

Mathis is entertaining behind the mic: “It’s the only baseball league in America where the umpire gives out hugs at home,” he announces after an exciting play at the plate. “That takes the 2015 record for the longest run to home plate,” says Mathis after a player found something interesting in right field and when they were called to run made a path, guided by his buddy, through the outfield and down the third base line to score. “And it’s fair!” Mathis describes a ball that bounces just outside the first base line before turning to explain that in Miracle League, “There’s a fair ball, a foul ball, and a fair-enough ball.”

Mathis keeps the crowds entertained, but he’s also a favorite with the players.

“When we drove up to the field, Micah said, ‘I hear Lenny,’” says Betsy Hothem Randall, a 1989 Wofford graduate. “They love him.” According to Randall, when Micah started playing baseball, she was hitting the ball off the tee and would take off up the middle of the field toward the pitcher. Now she moves to the plate with purpose and beats her Wofford buddy to first base after she gets a hit.

Dean directs the games and takes photos at the end – Lenny calls her “Paparazzi Pam.” Her husband coaches, and their daughter is a mascot. Her son plays for the Terriers. She admits that although there’s a draft every year, he always miraculously ends up in Wofford old gold and black.

“He was 20 years old before he knew he could play baseball,” Dean says. “We now have 4 year olds who never knew they couldn’t. We’ve changed the paradigm, and we hope we inspire others.”

They’ve certainly inspired the Wofford students who sign up to be buddies and Mathis as well.

“I’ve been out there more than a few times after a tough day,” Mathis says. “I may have started out in a bad mood, but by the time I left, I was not.”

Dean can’t say enough about Mathis or the Wofford buddies.

“They do a great job every time,” Dean says. “We can count on them every season because the Wofford coaches have partnered with us to send out big groups, and the parents love it when the Wofford buddies are out on the field with their children. They’re high quality buddies, and people notice.”