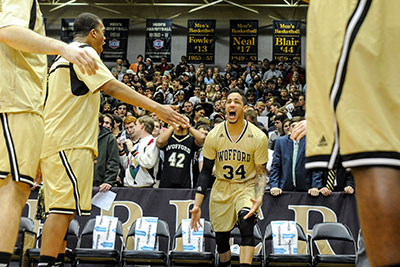 Mark Hauser, president of Hausercasting Services and the "Voice of the Wofford Terriers," posted this report on Lee Skinner ’15 in his Open Mic Daily blog.

Wofford basketball power forward Lee Skinner is turning pro. Two-year contract. He is headed for Austria to play for WBC Raiffeisen Wels. They last won the Austrian national championship in 2009. I don't know a thing about pro basketball in the high Alps, but I have to believe that WBC Raiffeisen Wels just upped their stock in terms of winning a title this year.

The numbers on Skinner during his senior were nice: 9.9ppg, a team-best 5.7rpg. The accolades were very good: two-time All-Southern Conference and, this past March, SoCon Tournament Most Outstanding Player.

But Lee's success goes far beyond what you read on a page or stat sheet. He was the heart-and-soul of the Terriers. A guy who did blue collar things and played the game like, in the words of a pitcher I once knew, "the other team was trying to take groceries off his family's table." I use the word 'family' because Lee uses it all the time and in all the right ways.

In his post-game interview following beating Furman in Asheville for the conference title and another trip to the NCAA Tournament, we asked Skinner how his team held off the stubborn Paladins. "We did what we've done all year. We stuck together. We responded as a family more than as a team. That's what we are. Everybody's got each other's back and best interest in mind."

Family means a lot to Skinner. If you don't come from much the phrase "got each other's back" when describing a family is telling. If you follow him on twitter his home page description is, "Heart of a poor boy, Mind of a conqueror. I dream big for those who can't." Coming out of high school in the Chicago area he had no D-1 offers. He considered trade school. But Lee was convinced to go to Fork Union Academy, a prep school in Virginia. Which just so happened to be where a fellow named Mike Young prepped once upon a time.

Back to that interview in Asheville, "He saved me. If it wasn't for Coach Young I don't know what I'd be right now without Wofford College and Coach Young......and especially these guys right here. They're my brothers. I love them."

What Lee Skinner is right now is a professional basketball player. WBC Raiffeisen Wels may not know it yet, but they just became more of a family. Their groceries are in good hands.