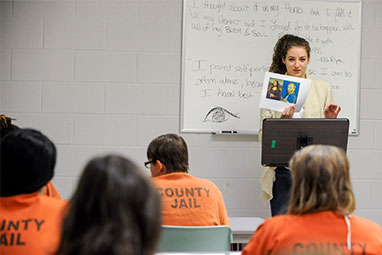 SPARTANBURG, S.C. – Wofford College senior Katie Harmon, an art history major and studio art minor from St. Louis, Mo., didn’t expect to be working in a jail. As a Bonner Scholar who is required to spend 10 hours a week in community service, however, Harmon goes where the need is greatest.

“I worked in the Northside of Spartanburg for three and a half years, mostly with an after-school program at the Northwest Recreation Center,”says Harmon. “This past fall, Haley Guss, the AmeriCorps Vista at the Spartanburg County Detention Center, asked for Wofford students who were potentially interested in working with therapeutic arts. Dr. Karen Goodchild [associate professor of art history and chair of the department at Wofford] referred me to Haley, and from there, we began corresponding and eventually started the program.”

Harmon held the first therapeutic art class in November 2014 in conjunction with four marriage and family therapistsfrom the West Gate Family Therapy Institute. The purpose is to help inmates work through the ideas of restorative justice.

“Restorative justice is more forgiveness-based as opposed to the standard retributive justice, which is punishment-based,”says Harmon. “We’re focused on helping inmates find some positive means of communication so that they can more positively deal with the crime that they’ve committed and learn about forgiveness. We try to show them that, yes, you did something wrong, and you’re working with the consequences, but you have a future beyond this.”

According to Harmon, the program switches between lessons on art history and therapy sessions, but the overarching focus is on areas of personal development and forward and positive thinking. The eventual goal is to lower inmate depression and anxiety rates. The art history aspect provides additional lessons on people and events from the past that can serve as models of behavior.

“The majority of the inmates are below a high-school reading level and have never been exposed to artists like van Gogh or Matisse. We’re building this base of artistic and cultural knowledge that they can recall and use,”says Harmon. “Now they know of people like Nelson Mandela.The inmates have especially been inspired by the Mandela quote, ‘Do not judge me by my successes, judge me by how many times I fell down and got back up again.’”

Currently, the Therapeutic Arts Program is raising money in order to sustain the program. Many of the inmates have donated their work for a benefit auction. A portion of the proceeds will go toward the purchase of supplies for the program. The rest will support the South Carolina Victim Assistance Network. The SCVAC provides funds to victims of crime so that they can have access to advocates and other necessities.

“The inmates I work with are so excited with the process. They know their art is being used to positively help others, and they take pride knowing that they are making money that can go back to the advocacy group,”says Harmon. “Through this program, the most important thing I’ve taken away is that everyone is human, and even though you’re incarcerated or have done something wrong, you’re still a person. So many people commit crimes because of other circumstances. They aren’t inherently bad, they’re just trying to get by and don’t know how to do it in the right way.”

If interested in donating to the program, fundraising has gone live at www.gofundme.com/SCDCarts. Once the $2,000 goal has been reached, a selection of inmate artwork will be framed and displayed in the Martha Cloud Chapman Gallery at Wofford College alongside pieces from Harmon’s collection. All of the artwork will be for sale during the exhibit.

An opening reception will be held on Thursday, May 7 at 2-3:30 p.m.  The event is free and open to the public. For more information visit scdctherapeuticarts.wordpress.com.