Raising support for people with disabilities 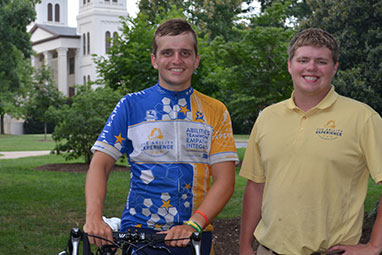 Wofford student Joe James ’16 drove 5,000 miles this summer as a crewmember for The Ability Experience Journey of Hope. That’s just the kind of person he is.

James says he felt compelled to volunteer as a crewmember because he’s “not the kind of guy to be in the spotlight, but to help others thrive when they get there.”

One of those people is fraternity brother and teammate Stephen Bendziewicz ’16, who cycled across the country from Long Beach, Calif., finishing in Washington, D.C. on Aug. 8. Both James and Bendziewicz participated in The Ability Experience’s Journey of Hope as a way to raise awareness and funds for people with disabilities.

“We cycle across the country for people who wish that they could cycle across their street,” says Bendziewicz.
The Ability Experience (formerly known as Push America) is a philanthropy owned and operated by Pi Kappa Phi, the only fraternity that owns and operates its philanthropy, says James. The Journey of Hope includes three teams with three different routes across the country, and every participant is a brother of Pi Kappa Phi. James, Bendziewicz and their teammates have been travelling the southern route, and the other two teams are taking the northern and trans-American routes. All will finish at the lawn of the Capitol in Washington, D.C.

As a crewmember, James ensured cyclist safety and hydration. He was also the team’s historian, taking photos at sponsored events and sharing them on social media.

“Spending time with the Ability First organization in Long Beach, Calif., was one of the best moments because it was our team's first Friendship Visit (an event including people with disabilities), and one in which I felt like I understood what this trip and organization is about,” says James. “On the Fourth of July we rode into Muleshoe, Texas, and I got to drive in a parade behind the cyclists… afterwards an Assembly of God Church served everyone 20-ounce steaks!”

As a cyclist, Bendziewicz raised more than $5,600 during the journey. James raised more than $3,000, and the collective amount raised by the Journey of Hope surpassed $569,000. The end goal was $650,000, but James says that fundraising is just one of the purposes of the trip.

“Many people hear about cycling for Journey of Hope, but what they don't understand is that cycling is not what the trip is about," says James. "The trip is about raising money and awareness for people with disabilities and changing society's perception of people with disabilities; celebrating people for who they are and what amazing abilities they have.”

For James, this purpose became clear when he got the chance to meet Tonya Rivera of Albuquerque, N.M. The founder of Every Ability Plays, an organization that facilitates the construction of playground equipment for people of all ability backgrounds, Rivera has cerebral palsy and uses a device to speak.

“Hearing her eloquent words through the machine contradicted every preconceived notion of people with disabilities…. Through amazing people like Tonya, I've learned to look at people for who they are and not what they can or cannot do. It's changed my perception of people with and without disabilities alike,” says James.

Near the end of their journey, James, Bendziewicz and the crew stopped in Spartanburg and visited with students at the South Carolina School for the Deaf and the Blind and Carolina Miracle League participants. They also enjoyed a brief respite at Wofford.

“The Journey of Hope rides every year, and the southern route always goes through Spartanburg with a stop at Wofford," says Bendziewicz. "I know I plan to go out and visit when next year’s team arrives! For me, one of the best parts of the trip was the ride into Spartanburg. Knowing that I had come so far and had finally made it back home was a touching experience.”

Bendziewicz, from Chapin, S.C., is a biology major (pre physical therapy), and James, a native of Cayce, S.C., is pre-law, majoring in English and philosophy. Their intended careers focus on helping others, and their experiences as Pi Kappa Phi brothers and participants in The Ability Experience Journey of Hope have given them a head start.