Home > About > News > News Archives > 2015 > Professor, author Singleton to be inducted into Fellowship of Southern Writers

Professor, author Singleton to be inducted into Fellowship of Southern Writers 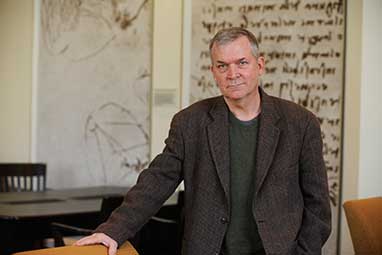 Singleton holds the John C. Cobb Chair in the Humanities at Wofford. The Southern author has written several collections of short stories and three novels. His latest book, “Between Wrecks,” his sixth book of short stories, was published in 2014.

Singleton came to Wofford in 2013 from the South Carolina Governor’s School for the Arts and Humanities in Greenville, where he had taught fiction writing and editing for 13 years. He has been a visiting writer at the University of South Carolina, the University of North Carolina Wilmington and other colleges, and has taught at Francis Marion College and the Fine Arts Center in Greenville, a magnet school.

A native of Anaheim, Calif., Singleton grew up in Greenwood, S.C., and is a 1980 graduate of Furman University. He holds an MFA degree from the University of North Carolina at Greensboro. In 2009, he was a Guggenheim Fellow, and in 2011 he was awarded the Hillsdale Award for Fiction by the Fellowship of Southern Writers.

His other works include: “These People Are Us: Stories,” “The Half-Mammals of Dixie,” “Why Dogs Chase Cars: Tales of a Beleaguered Boyhood,” “Novel,” “Drowning in Gruel,” “Work Shirts for Madmen,” and “Pep Talks, Warnings, and Screeds: Indispensable Wisdom and Cautionary Advice for Writers.” The John C. Cobb Endowed Chair in the Humanities was established by a $2.5 million gift from Ann Cobb Johnson of Spartanburg, sister of Cobb, a beloved professor of humanities and English at Wofford beginning in 1994. The 1976 Wofford graduate died in the summer of 2004 in a tragic automobile accident.

Also being inducted into the Fellowship of Southern Writers are poets Kate Daniels, Brooks Haxton and C.D. Wright, and fiction writers Steve Yarbrough and Tayari Jones.

The induction takes place at the Celebration of Southern Literature in Chattanooga, described as “part writers’ conference, part book fair and part homecoming for authors who share a connection to the region and its literary spirit.”

The Fellowship of Southern Writers, founded in 1987 by a group of writers who met in Chattanooga, is a nonprofit organization that has for its objective the encouragement of literature in the South. Members include Shelby Foote, Flannery O’Connor, Robert Penn Warren, Eudora Welty, James Dickey, Fred Chappell, Cleanth Brooks, C. Vann Woodward, Ernest Gaines, Reynolds Price, Walker Percy, Ralph Ellison, Wendell Berry, and other Southern literati.