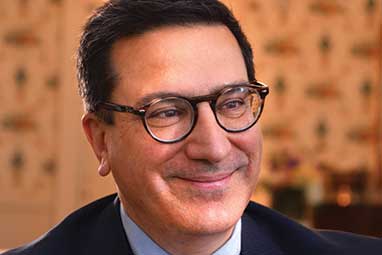 SPARTANBURG, S.C. – Wofford College President Nayef Samhat was honored Saturday, April 25, in Chicago by the Northwestern University Alumni Association (NAA) with one of its 2015 Merit Awards.

Samhat, who received his Ph.D. in political science from Northwestern in 1995, received the Merit Award from The Graduate School, presented for high achievement in a profession or field. He is among 10 Merit Award honorees being recognized by the alumni association. The award recipients were recognized for earning acclaim in business, education, film and television, sports, law, literature, health care, philanthropy and the arts.

“Northwestern University is recognizing a fact that has been made quite evident to all of us in the Wofford community in these past 20 months since Nayef joined our college as president,” says Harold Chandler, chairman of the Wofford Board of Trustees. “He is truly a person of great distinction and accomplishment, and we are pleased that one of his alma maters has seen fit to draw this deserved attention to Nayef. All of us who love Wofford salute Nayef on this major honor.”

“I was surprised and am truly honored and humbled by this recognition,” Samhat says. “My professors at Northwestern guided me to think in ways that led to fulfilling intellectual discoveries of my own. I am grateful for my time there.”

According to the Northwestern Alumni Association’s website, the organization has honored distinguished alumni since 1932. The NAA “has carried on the cherished tradition of honoring alumni who have distinguished themselves as outstanding professional and personal achievers in their fields and who have loyally dedicated their time and service to their alma mater.

“Each year, the NAA recognizes these individuals, those whose accomplishments have reflected positively not only on their own abilities, but also on Northwestern University,” according to a news release.

“These alumni have given much time and energy to support the University's welfare and progress. That progress depends not only on academic excellence but also on the professional accomplishments and dedicated service of the University's alumni. Thus, the NAA is proud to honor these distinguished graduates in the presence of Northwestern faculty, administrators, and friends at an annual awards celebration,” the release continues.