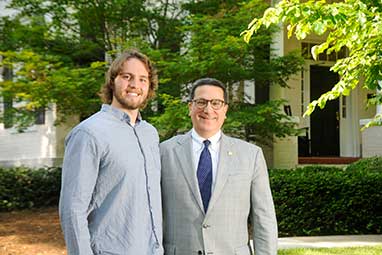 SPARTANBURG, S.C. – Phifer Nicholson has spent much of his three years at Wofford College studying interfaith engagement and the power it can have in creating peace between differing faith communities. Now he will get a chance to experience that first-hand as the 2015-16 Presidential International Scholar, traveling to Turkey and living with an Arabic-speaking minority Christian community in a majority Muslim country.

“I have a passion for seeking and creating peace as a committed Christian in the midst of this diverse, rapidly globalizing world,” says Nicholson of Plymouth, Minn., who is majoring in  religion and minoring in business.

Nicholson was named the 32nd Presidential International Scholar by Wofford President Nayef Samhat at the college’s annual Honors Convocation held on campus today (Thursday, May 7, 2015). The innovative program allows one student to travel internationally to research an independent project. The Presidential International Scholar is selected by the president of Wofford College as a student with exceptional potential to benefit humankind as evidenced by a demonstrated passion for service learning combined with a globally minded intellectual curiosity.

Also recognized during the Honors Convocation was the 2014-15 Presidential International Scholar Lindsey Grace Perret, a graduating senior majoring in Spanish from Charleston, S.C. Her independent study project centered on women as agents of change in Latin America.

Other academic honors and awards also were presented at the event.

“Phifer Nicholson is a young man with passion for learning, understanding the world and being a part of solutions to its complex problems,” Samhat says. “He exhibits a thoughtfulness and drive for seeking peace in difference, as his study project reflects. He was among a small group of students who led the movement to have Arabic taught here at Wofford, because he wanted to expand his abilities to study and communicate in the global community. As the Presidential International Scholar, Phifer surely will make an impact on the lives of all he meets and on us back at home when he returns to show us what he has done.”

While conducting his independent study project, titled “Inter-Faith Relationships: Seeking Peace in Difference,” Nicholson will spend about a month – Sept. 1 through Oct. 8 – in Istanbul, Turkey, conducting field research in and among Christian minority groups, collecting stories of interfaith peacemakers. He then will travel to Haifa, Israel, and join the Council on International Education Exchange International Relations, Psychology & Peace and Conflict program. There he will have the option to intern at such organizations as the Arab-Jewish Center, the Center for Battered Women, governmental social work agencies, or public and special education facilities.

In January 2016, Nicholson plans to join a Christian community in Bethlehem, continuing his research and story collecting.

He plans to compile the stories of these interfaith peacemakers into a collection or book for the culmination of the project.

Nicholson, who came to Wofford with the plan of playing football, though not on an athletics scholarship, joined the Terriers football team only to suffer a shoulder injury and never see a snap. He remains on the roster as a student assistant, working with strength and conditioning coaches, helping with equipment and in other capacities. He attends all practices and games.

“I try to serve wherever I can. These are my brothers, guys I want to be around,” he says, adding that he is one of the leaders of Wofford’s chapter of the Fellowship of Christian Athletes. He also is involved with the Interfaith Youth Core.

As an evangelical Christian, Nicholson says objectivity is the goal when it comes to his research, especially when working with people of different religious beliefs, and he “sees a mandate” to seek it in his faith.

“I have a calling to love people, and I believe that a way that I can love people well is by representing their voice how they would want it to be heard,” he says. “That is my goal in my research and the work I produce.

“Muslims who have embodied their faith on Wofford’s campus have powerfully influenced me, an American Christian, through their friendship and faith,” he adds. “We may disagree fundamentally on many key issues, but have nonetheless forged deep relationships. These relationships bridge the differences and help bring peace in the midst of disagreement.”

Outside of Wofford, Nicholson is active in his local faith community, Summit Church.

Nicholson has sought to expand the boundaries of his education beyond the Wofford campus. Recently he traveled with Dr. Ron Robinson, the college’s Perkins-Prothro Chaplain and professor of religion, and Dr. Trina Jones, professor of religion, to Washington, D.C., “to delve deeper into the theory and methods of interfaith engagement and its mission to bring peace and further human flourishing,” he says. The group met with Dr. Shaun Casey of the U.S. Department of State and founder and head of the Office of Religion and Global Affairs and discussed how he is seeking to further religious freedom and human rights globally.

Last fall, Nicholson began learning Arabic with the goal of becoming fluent, and during Interim this year he traveled to Turkey with Dr. Philip Dorroll, assistant professor of religion. This summer, Nicholson will work with Dr. Byron McCane, professor of religion, at an archeological dig in Israel exploring the anthropological roots of the Bible. “All these experiences offer a firm foundation for my continued learning, growth and impact through the Presidential International Scholarship, and they have inspired in me a passion for seeking peace as a committed Christian in the midst of this diverse, rapidly globalizing world.”

Dorroll will be his faculty adviser during his travels and studies as the Presidential International Scholar. Nicholson offers special thanks to Dorroll and other faculty and administrators for their support. “I want to give a special thanks to Dr. Dorroll, Dr. McCane, Dr. Ana Maria Wiseman (dean of international programs), Dr. Robinson and the many other faculty members and staff – the list could go on and on – who have helped me discover, refine and articulate these thoughts over my time at Wofford and who have challenged me in ways for which I will be forever grateful. I also thank the anonymous donor for making this a possibility, Dean Amy Lancaster (assistant dean of international programs) for her help with the logistics of the project, and Dr. Samhat for honoring me with this opportunity.”

Nicholson, a graduate of Heritage Christian Academy in Maple Grove, Minn., says his plans after graduating from Wofford in 2016 are not firm; maybe the ministry or maybe teaching, or both. “However, I do know this: whatever I end up doing, I will be constantly seeking to learn, teach and serve, whether that be in academia, vocational ministry or another path. Furthermore, this opportunity (of being the Presidential International Scholar) will shape me and help me further discern my calling, and I am certain it will be applicable in ways I cannot even fathom now.”

The Presidential International Scholarship program, funded by an anonymous donor, provides the selected student the opportunity to travel and study independently for five months during the scholar’s senior year, returning for the spring semester.