May 17 graduation to feature presentation of two honorary degrees 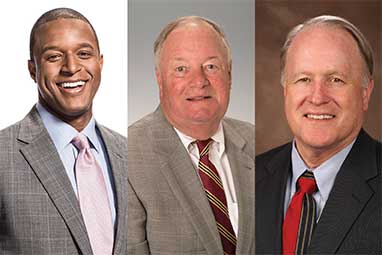 SPARTANBURG, S.C. – Craig Melvin, a national correspondent for NBC’s “TODAY” show, occasional host of the network’s “Weekend TODAY” and a 2001 Wofford College graduate, will be the featured speaker at the college’s 2015 Commencement Exercises, scheduled for 9:30 a.m. Sunday, May 17, on the lawn of Main Building.

During the event, some 370 graduates will receive their degrees, and honorary degrees will be awarded to South Carolina banker Hugh C. Lane Jr. of Charleston, S.C., and 1968 Wofford graduate Henry C. Giles Jr., president of Spartanburg Community College.

“Craig Melvin brings a wealth of knowledge and experience to share with our 2015 graduates,” Wofford President Nayef H. Samhat says. “It is exciting to see how far Craig has gone since his time at Wofford to a national stage where he sees and reports on history being made every single day. We are proud of Craig’s accomplishments and very pleased to have him back on the Wofford campus to share his story of success with our students.”

In addition to being a national correspondent for “TODAY,” Melvin occasionally fills in as a host for Lester Holt on “Weekend TODAY.” Both programs are on NBC.

Most recently, Melvin was on the ground reporting from Dallas, Texas, on the Ebola outbreak and in Ferguson, Mo., in the aftermath of the Michael Brown shooting. Previously, he anchored “MSNBC Live” on Saturdays and Sundays. Prior to joining MSNBC in July 2011, Melvin was a weekend anchor for WRC, NBC’s owned-and-operated station in Washington, D.C. Melvin earned acclaim as an evening news anchor for WIS in Columbia, S.C.

Melvin is widely recognized for his reporting on topical issues that matter most. He has covered a wide range of events, including the Republican and Democratic National Conventions; election night coverage for TVOne in partnership with NBC News; the Asiana Airlines 214 crash in July 2013; the George Zimmerman trial; the deadly tornado in Moore, Okla.; the Sandy Hook school shooting; and a series on the future of Historically Black Colleges and Universities (HBCUs). Melvin received two Emmy Awards for his reporting at WIS and also was named “Best Anchor” by the South Carolina Broadcaster’s Association. His journalism career began during high school when he served as an “Our Generation” reporter for WIS. In that role, he became one of the youngest recipients of an Associated Press award for a report on innovative teaching. He received a B.A. degree in government from Wofford College.

This will be the first time in two decades that Wofford will have an outside speaker for its graduation. Since 1996, the president of the college has served as the Commencement speaker. The last guest speaker for graduation was then-Gov. John C. West, who spoke in 1995. The next year, graduating seniors requested that then-Wofford President Joab M. (Joe) Lesesne be their Commencement speaker. Since that time, tradition held that the president was the speaker for the occasion. The tradition continued through the 13-year tenure of Dr. Benjamin B. (Bernie) Dunlap and into 2014, when Samhat spoke as the college’s new president.

“Inviting a Wofford graduate to be our guest speaker for Commencement offers opportunities for our students to hear the stories of successful and visible people – how they got where they are and what they gained from their college experiences,” Samhat says. “I think it’s important to our graduates to hear the stories of other Wofford graduates and to understand their own next steps out into the real world and what they can make of themselves with their Wofford education as the foundation.”

HUGH C. LANE JR.
Hugh C. Lane Jr. is a fourth-generation banker and native of Charleston, S.C., where he is chairman of the board of The Bank of South Carolina. Lane was graduated from the Choate School in Wallingford, Conn., and, in 1970, earned a B.A. in economics from the University of Pennsylvania. Upon graduation, he entered the U.S. Navy with the rank of ensign. After receiving an honorable discharge, he began his banking career in 1972 at C & S National Bank of Georgia in Atlanta. In 1973 he accepted a position with Chemical Bank, New York, and worked in the bond, leasing and international departments. In 1974, he returned to South Carolina to accept a position with C & S Bank of South Carolina as city executive of the Sumter office. He served on the C & S Bank of South Carolina board of directors for 14 years.

In 1976 Lane returned to his hometown of Charleston to serve as executive vice president, heading C & S Bank’s Southern Region Credit, with responsibility for approximately 300 employees. In 1986 when C & S Bank of South Carolina was acquired by C & S Bank of Georgia, Lane resigned to head a group of local business and community leaders who shared his antipathy for interstate banking. They organized The Bank of South Carolina. He held the office of president and CEO until April 2012, when he assumed the role of chairman of the board.

Lane has served as a member of the advisory committee for the ACE Basin National Estuarine Research Reserve System and is currently the chairman of the Charleston County Conservation Bank board. He is trustee and chairman of the board of trustees for the Belle W. Baruch Foundation; trustee and past chairman of the board at Wofford College; trustee and past chairman of South Carolina Independent Colleges and Universities Inc.; trustee and past president of the Charleston Museum; past co-chairman of the community relations committee; past member of the advisory committee for the Storm Eye Institute of the Medical University of South Carolina; member of the Trident Chamber of Commerce; and past member of the board of Trident Urban League. Lane is the recipient of honorary doctorates from Charleston Southern University and The Citadel. He was the 1997 recipient of the Distinguished Citizen Award from the Wofford College National Alumni Association, as well as the 1997 recipient of the Avery Citizenship Award for outstanding community service, presented by the Avery Research Center. The Charleston (S.C.) Chamber of Commerce presented Lane with the 2004 Joseph P. Riley Leadership Award. In 2008, Lane was awarded the Order of the Palmetto by then-Gov. Mark Sanford.

Giles received a bachelor of arts degree in mathematics from Wofford in 1968. He received his masters of teaching in mathematics in 1970 from Converse College in Spartanburg and did graduate work in higher education administration at Nova University in Fort Lauderdale, Fla., and in management at the University of South Carolina in Columbia.

For 13 years, he was an active member of the National Association of Accounting, serving in numerous board positions. He served as chair of the State Board for Technical and Comprehensive Education’s Chief Business Officers Peer Group.