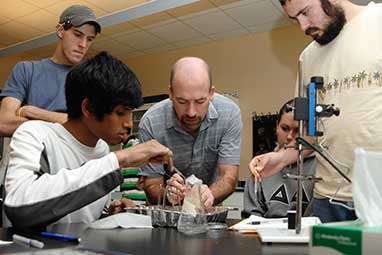 SPARTANBURG, S.C. – Dr. John F. Moeller, associate professor of biology at Wofford College, is among 20 college professors from across the state recognized today (Tuesday, April 14, 2015) by the South Carolina Independent Colleges and Universities (SCICU) consortium. The 2015 Excellence in Teaching awards are presented annually to one nominee from each of the state’s private colleges.

Honorees receive a $3,000 professional development stipend during an awards dinner to be held tonight in Columbia.

Moeller received his B.A. in animal physiology from the University of California, San Diego, and his Ph.D. in biology from the University of California, Santa Barbara. His graduate work focused on the sensory physiology, anatomy and behavior of deep-water crustaceans of the Pacific Ocean. Moeller conducted a post-doctoral research project at Florida State University investigating the role chemosensory systems play in reproductive behavior. These studies focused on the neural pathways that mediate chemosensory signals in sharks and stingrays. He also has participated in projects developing aquaculture techniques for Pacific sturgeon and in studies examining retinal development in amphibians.

At Wofford, he teaches biology concepts and methods, cell and development, and human physiology.

“John is an excellent teacher, a skilled researcher, a mentor to both colleagues and students, and he is widely appreciated for his quiet and effective leadership skills,” Dr. Dennis M. Wiseman, provost at Wofford, says. “This is a signal honor for John, and it reflects the respect and appreciation that we all have for him.” Wofford President Nayef Samhat says, “John Moeller has the collaborative spirit and represents the ideals of excellence in teaching at a liberal arts college. He engages students in the classroom and research laboratory, and his work has involved collaborations with faculty across disciplines. In addition, in his role as one of the lead advisers for biology majors who aspire to careers in medicine he maintains close relationships with medical schools and works tirelessly to help Wofford students achieve those dreams.”

“Since coming to Wofford as an associate professor in biology in 2007, Dr. Moeller’s impact on the biology department and beyond has been positive and profound,” Dr. Ellen S. Goldey, the William R. Kenan Jr. professor and chair of the biology department, says. “He has established a lasting legacy at Wofford with his crucial contributions to the creation and continual refinement of our nationally acclaimed biology courses for first-year students.” She points out that his research and that of his students involving velvet ants has culminated with student presentations at the Animal Behavior Society and the Association for Southeastern Biologists.

Before coming to Wofford, Moeller taught for six years at St. Andrews Presbyterian College and served as chair of the department for five years. While at St. Andrews, his research shifted to communication and behavior in various species of insects, especially wasps. His current research focuses on the stridulation of the wingless wasps, commonly known as velvet ants. Most of these organisms are solitary parasites on the larvae of ground nesting bees and wasps. Future research will focus on how these velvet ants locate the nests of their hosts.

Each year, SCICU recognizes “the best of the best” faculty members at its institutions with its Excellence in Teaching Awards. “The hallmark of South Carolina’s private non-profit colleges and universities is their emphasis on individualized learning and student achievement. This can only be accomplished by a faculty of the highest quality working in a supportive environment that encourages and fosters serious inquiry, critical thinking and a broader understanding of the world in which we live,” the organization’s leaders say.

The winning teacher-scholars represent “many different academic disciplines and bring a rich diversity of education, experience and interests to our campuses.”