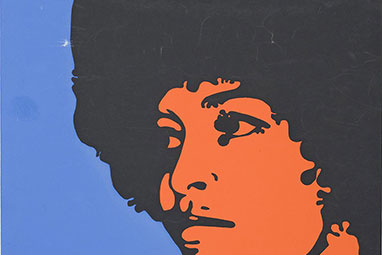 “Sustaining and Spreading the Revolution: Cuban Political Propaganda Posters from the Collection of Lindsay Webster” will be on exhibit in the Martha Cloud Chapman Gallery in the Campus Life Building throughout March.
2015-02-27

SPARTANBURG, S.C. – March will be filled with Women’s History Month events, music, lectures and gallery exhibitions at Wofford College, along with other activities.

Wednesday, March 4
World Film Series: “Juan of the Dead”
3:30 p.m. and 7:30 p.m., Olin Teaching Theater, Franklin W. Olin Building
Director: Alejandro Brugués; Spain/Cuba, 2011; 100 minutes; Spanish with English subtitles. “In the middle of what official media refer to as isolated incidents provoked by dissidents paid by the U.S. government, in a Havana filled with flesh eating zombies, one hero, Juan, comes to the rescue. The only way to beat them is destroying their brains, so Juan realizes there is an upside to this situation; he can confront them making some money out it. Juan adopts the motto ‘we kill your beloved ones’ ... at a reasonable price, and by doing so begins with this business/adventure that evolves into this Cuban zombie comedy that is great fun for all of your beloved ones.” Review from www.juanofthedeadmovie.com. The film may not be appropriate for younger viewers. It may contain violence, nudity, sensuality, rough language or contain or refer to alcohol/drug use.

Wednesday, March 11
Lecture and book signing by Van Hipp ’82
7 p.m., Leonard Auditorium, Main Building
Followed by a public reception in the reception room of the Papadopoulos Building
Van Hipp ’82 will present a lecture on his new book, “The New Terrorism: How to Fight It and Defeat It.”

Thursday, March 12
Executive Speaker Series: “Marketing for the NBA”
Speaker: Kent Christian ’00
11-11:50 a.m., The Space in the Mungo Center
Kent Christian ’00 is the senior director of events, marketing and operations for NBA Europe. He will discuss his journey from Wofford to London. In his role, he has planned events that included appearances by Prince William and Kate Middleton.

Thursday, March 12
Faculty Talk: “The Behavioral Economics of Incentives”
Speaker: Jeremy Henkel, assistant professor of philosophy
3:45-5 p.m., Gray-Jones Room, Burwell Building
Individual decisions sometimes generate outcomes that, for some of the people involved, are considered to be suboptimal: professors want students to study more; employers want workers to work harder; communities want fewer crimes, etc. Obviously, these are not impossible goals. All these and other changes in behavior are theoretically attainable. So how does one change a person’s behavior in the desired direction? The standard view in economics used to be that a set of explicit incentives, implemented in the form of conditional rewards or punishments, is a sufficient condition for achieving these goals. Jeremy Henkel, assistant professor of philosophy at Wofford, argues that this view is incomplete and potentially counterproductive. Recent experimental evidence in behavioral economics suggests that explicit incentives are not always independent of human motivation, and as a consequence, they may backfire and reduce the performance of agents and the compliance of rules.

Thursday, March 12
Troubadour Series Concert: Gohar Vardanyan
7-8 p.m., Leonard Auditorium, Main Building
Widely admired for her technique and artistry, Armenian guitarist Gohar Vardanyan has performed throughout the United States for numerous guitar societies, universities and arts organizations, including the Smithsonian Institution in Washington, D.C.; Alice Tully Hall at the Lincoln Center; and guitar societies in Seattle, San Francisco, Houston, Miami and New York City. She has appeared on National Public Radio in the United States and Radio Nacional in Argentina. Vardanyan has performed with the Juilliard Opera Center and as a soloist with the Great Lakes Chamber Orchestra and Panama National Symphony Orchestra. She also has been a guest artist at the “Encuentro Internacional de Guitarra” in Panama and the Hamilton International Guitar Festival in Canada. Vardanyan frequently teaches master classes and guitar technique workshops during her concert stops. She is an author of three books from Mel Bay Publications. She’s a frequent writer on Mel Bay’s Blog and instructor on Strings by Mail’s YouTube Lessonettes, a series of mini video lessons. Vardanyan holds a master of music degree from The Juilliard School and a bachelor of music degree from the Peabody Conservatory of Music. She is an alumna of the Aspen Music Festival and School. She is sponsored by Strings by Mail.

Friday, March 13
Women’s History Month: SCATE Night
7 p.m., Campus Life Building
SCATE (Sharing Creative Arts Through Expression) Night is an opportunity for Wofford students and faculty to showcase their talents in singing, playing an instrument or reading a poem. The month’s theme of Women’s History will include anything related to women, gender or sexuality topics. The program is co-sponsored by the Cultural Affairs Committee and the Office of Diversity and Inclusion.

Thursday, March 19
Women’s History Month: Lady Parts Poetry Reading
6:30 p.m., Hub City Bookstore, downtown Spartanburg
Community members and students from around Spartanburg will come together for the third annual poetry reading at Hub City Bookstore. All readings will be centered around women and women’s issues. The program is co-sponsored by the Wofford’s Cultural Affairs Committee and Hub City Bookstore.

Friday, March 20
Women’s History Month: “Feminism and the Legacies of Armed Struggle in Kurdistan”
Speaker: Susan Benson-Sokmen, University of Toronto
4 p.m., Olin Teaching Theater, Franklin W. Olin Building
In an op-ed piece published in the New York Times during the siege of Kobani, Meysa Abdo, a Kurdish female commander with the People’s Protection Units (YPG) defending the Syrian town against the fighters of the Islamic State of Syria and Iraq (ISIS), asks women to pressure their governments to send weapons to the Kurdish fighters. After reminding women that the YPG are “fighting for the rights of women everywhere,” she then extends an invitation to come to “join” the fight in Kobani. Abdo’s call to arms may provoke feminist discomfort about the “possibility of emancipatory politics” emerging from a culture of militarized violence (Manchanda). However, it also brings to light feminist legacies of political violence and feminist histories of armed struggle. Susan Benson-Sokmen, a Ph.D. candidate at the University of Toronto, will speak about the role armed struggle plays in the articulation of the Kurdistan Workers’ Party (PKK) feminist theory as well as how “ordinary” Kurds make meaning out of this violence through everyday negotiations of gender and nation. Her talk is based on fieldwork conducted in Northern Iraq and Doğubayazıt, Turkey in 2012 and 2013. Her research interests include the relationship of feminism to imperialism, nationalism and armed struggle, non-state histories, histories of violence and the production of history outside the academy. The program is co-sponsored by the Muslim Student Association and the Cultural Affairs Committee.

Wednesday, March 25
World Film Series: “Love”
3:30 p.m. and 7:30 p.m., Olin Teaching Theater, Franklin W. Olin Building
Director: Doze Niu; Taiwan/China, 2012; 127 minutes; Mandarin with English subtitles. “Headed by international star Shu Qi and Mainland superstar Zhao Wei, both carry the film broadly on their shoulders. However, it is the love stories that make the movie a romantic affair. What makes ‘Love’ a good movie is the fact that it doesn’t go overboard in the overtly romance notion. It tries to deal with some real issues yet at the same time providing a true Hollywood experience. Along the lines of ‘Love Actually’ and countless Hollywood Valentine’s Day events, ‘Love’ is a good movie and works well within its defined boundaries without being truly special.” Review from www.womenwhoflirt.com. The film may not be appropriate for younger viewers. It may contain violence, nudity, sensuality, rough language or contain or refer to alcohol/drug use.

Saturday, March 28
The Space Impact & Launch Competition
4-10 p.m., The Michael S. Brown Village Center
Ten talented, motivated Wofford students will pitch their businesses or social-good projects for a chance to win $20,000 in cash and prizes. The public is invited to come out and support their favorite students as they compete before a panel of judges.

Sunday, March 1, through Tuesday, March 31
“Sustaining and Spreading the Revolution: Cuban Political Propaganda Posters from the Collection of Lindsay Webster”
Martha Cloud Chapman Gallery, Campus Life Building, and Sandor Teszler Library Gallery
Following the Cuban Revolution, the new Communist government used political posters to convey important revolutionary themes, such as anti-Americanism and solidarity with anti-colonial movements around the world. The vivid and creative designs of the posters demonstrate how Cuban artists were able to develop their own style to express these ideas. This is a unique collection of rarely displayed Cuban political posters generously loaned by Lindsay Webster. The opening reception will be held from 4 to 6 p.m. Thursday, March 12, in the Martha Cloud Chapman Gallery in the Campus Life Building.