Lessons from the dugout 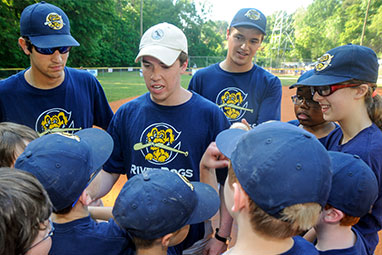 “What’s your favorite jelly bean color?” That was the question that Little League baseball coaches Henry Cornelson ’18, Owen Hughes ’18 and Cason Wells ’18 asked their players at their first practice as a way to get to know their team of 9- and 10-year-olds.

The team’s responses were as unexpected as the lessons that the three Wofford students learned in their first experience as coaches.

“First off we had to learn to keep their attention,” says Wells, a business economics and Spanish major from Thomasville, Ga. “We set up three stations so everyone was busy during practice. We learned patience and how to improvise. Not everyone understands the same way, so we had to come up with different ways to explain the same things.”

Hughes, an accounting and finance major from Knoxville, Tenn., watched YouTube videos and consulted coaching worksheets to develop best practices. “We even had to figure out how to draw up a snack schedule for parents.”
“We’ve got lots of great stories,” says Cornelson, a business economics and Spanish major from Greenville, S.C. “Kids are funny, and we learned a lot from them.”

The three Wofford students, all Kappa Alpha Order fraternity brothers, coached the team weekly through two practices and two games from early March through the end of the semester.

“I’ve always wanted to coach a baseball team,” says Hughes, who looked up opportunities online and discovered the Hillbrook Baseball League just a short drive from campus. He called the league president, Trent Lancaster, who he quickly discovered was a Wofford graduate (Class of 1991) and a fellow fraternity brother.

According to Lancaster the Wofford student coaches received praise from the parents for teaching the team more than the fundamentals of baseball.

“From day one, their maturity was as good as any adult I’ve ever worked with,” he says. “I heard Wofford President Nayef Samhat speak a few times on the importance of providing opportunities for Wofford students to get outside of their comfort zones. These students did just that, and they really excelled.”

Lancaster says that Thomas Willingham ’14 coached a Hillbrook Baseball team the year before and also served as a great role model to the young players. “I’m proud that this has happened twice now,” he says, “and the current guys say that they’ll be back next year.”

Hughes coached third base for the River Dogs; Wells coached first, and Cornelson kept the record book and managed the dugout. All three are aware that they’re representing both Wofford and their fraternity every time they step onto the field.

“We know the team is watching what we’re doing,” says Hughes, “and we want every message to be positive.”
Cornelson likes serving as an example to his fraternity brothers as well. “They see us leaving on Saturday afternoons to go coach a Little League team, and they want to know more. It makes us feel good.”

The Hillbrook River Dogs won their division this year, but the Wofford students all feel that the bigger prize was the experience.

“Coaching a Little League team was a lot more responsibility than we realized, but it was completely worth it,” says Wells.