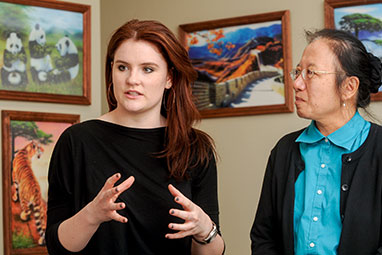 "SPARTANBURG, S.C. - Sophomore Helen Lamm already has a job lined up after she graduates from Wofford College in May 2017. Recently selected as the recipient of a prestigious Boren Scholarship to China, Lamm will spend a year abroad honing her language skills and another year at Wofford completing her degree before joining the federal government in the area of national security.

“I’m getting to study the language and culture that I love, and I have a job lined up after college. I’m so grateful for this opportunity and for those who helped me along the way,” says Lamm, a Chinese language major with minors in history and studio art from Florence, S.C.

While in China, Lamm will be studying environmental protection through the C.V. Starr Middlebury School in Kunming for the first semester. During Interim she will take the intensive language course in Beijing. Although plans for the second semester are still tentative, Lamm is planning to continue her environmental research or to complete an internship in either Kunming or Hangzhou.

“There are so many opportunities out there for people who study Chinese, but many go untapped,” says Lamm. “Dr. Li Qing Kinnison (Chinese) and Dr. John Farrenkoff (government) at Wofford as well as my experience at Middlebury opened my eyes to different options.”

Kinnison believes that Lamm was a strong candidate because of her work with the National Outdoor Leadership School as well as her diverse interests.

“Helen has such a wide range of interests and knowledge — she dances well, paints well, draws well, speaks well and asks tough questions — and she brings all of that with her to class,” says Kinnison. “She, like Wofford Rhodes Scholar Rachel Woodlee ’13, wants to use her knowledge to build a bridge between China and the United States.”

As a senior in high school visiting Wofford, Lamm met Woodlee on campus.

“She is one of the reasons I came to Wofford,” says Lamm. “I’m still inspired by her.”

The Wofford professors who wrote recommendations for Lamm believe she’s done her share of inspiring others as well during her two years at Wofford.

“Every colleague who has taught her lights up when her name is mentioned and starts talking happily and excitedly about her,” says Dr. Amy Sweitzer, associate professor of English. “I think this is because Helen is not only exceptionally intelligent, but exceptionally delighted by the experience of sharing any insight or understanding…. Her intelligence is inseparable from a genuine kindness and striking humility, and her pleasure in learning and in sharing understanding is contagious.""

“I was clumsily trying to make a point about Chinese characters,” says Byrnes, “and knowing of Helen’s Chinese language skills, I rather unfairly put her on the spot. It occurred to me that her knowledge was likely better than mine, so I asked her to go to the board and explain what I was trying to convey. She did a wonderful five minutes of teaching, completely without warning or preparation. That’s Helen.”

Boren Awards provide U.S. undergraduate and graduate students with resources and encouragement to acquire language skills and experience in countries critical to the future security and stability of our nation. In exchange for funding, Boren Scholarships recipients agree to work in the federal government for a period of at least one year. Fellows will live in 40 countries throughout Africa, Asia, Central and Eastern Europe, Eurasia, Latin America and the Middle East. They will study 37 different languages. The most popular languages include Arabic, Mandarin, Russian, Portuguese and Swahili.

“To continue to play a leadership role in the world, it is vital that America's future leaders have a deep understanding of the rest of the world,” says University of Oklahoma President David Boren, who as a U.S. senator was the principal author of the legislation that created the National Security Education Program (NSEP) and the scholarships and fellowships that bear his name. “As we seek to lead through partnerships, understanding of other cultures and languages is absolutely essential.”