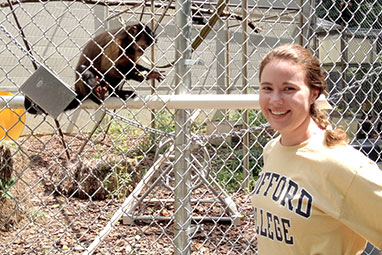 SPARTANBURG, S.C. — When Wofford College senior Sara Futch was a child she loved the book "Koko's Kitten," a touching real-life story about a gorilla and her cat. Futch read it all the time. Then she discovered Jane Goodall, who lived with the chimpanzees. She carried those inspirations with her to college and now is studying primates and writing and publishing her own research as a Wofford student.

"Primates, especially apes, are intelligent and in some ways very similar to us; I enjoy learning how they perceive and understand the world," says Futch, a German and psychology major from Lawrenceville, Ga. "The language studies with apes like Koko (sign language) and the chimps at the Language Research Center (a lexigram system called Yerkish) also solidified my interest in primates. Because of these studies, humans are able to, on some level, communicate with another species, and I’ve been fortunate to witness some of this in action at the LRC.”

For the past two summers, Futch has served as an intern in the lab of Dr. Michael Beran, associate director of the Language Research Center and associate professor of psychology at Georgia State University. As a member of Beran's team, Futch has written and published research in the Journal of Comparative Psychology and Cognition, and the research has caught the attention of CNN, Science Daily, the National Science Foundation (NSF) and other national news outlets.

During the summer of 2014, the team found that chimpanzees are capable of planning. The study compared maze completion in chimpanzees and human children and discovered that they were similar in terms of overall correct maze completion. Chimps, however, exceed their human competitors at inhibiting responses that would lead to a mistake or trap. Both the capuchin monkey and rhesus monkey performed worse than chimps and human children.

“I spent most of the internship coding all of the videos of the primates completing the tasks: whether they went directly toward the target, fell in any traps and/or turned the cursor around to avoid a trap,” says Futch.

This summer the team studied metacognition in chimpanzees — "whether or not they are aware that they've gotten a task correct," explains Futch. "For this study we used a basic memory task with a delay between the chimp's response and any feedback about their performance. The dispenser for the treats they received for getting an answer right was one to two enclosures away, so the chimp had to move to receive their treat. If they got to the dispenser too late, then they lost access to any treat. Because of this set-up, it would be beneficial for the apes to start moving toward the dispenser before they received any feedback if they believed they got the trial right, but to stay put if they got the trial wrong."

According to Futch, the chimps did move significantly more before they received feedback when they got the trial right and not when they got it wrong, showing metacognition.

“For this research I helped code responses during the trials and helped edit and revise the paper," she says. "I feel really lucky to have gotten to be a part of such a great team at the LRC. We all put in a lot of work collecting and analyzing the data, and I’m glad it’s paid off in this way.”

A third paper is in the works based on data collected over the past two summers, says Futch, as well as a another paper under review, with Dr. Alliston Reid, Reeves Family Professor of Psychology at Wofford, and other Wofford students dealing with data collected during a Learning and Adaptive Behavior Class.

In addition to her work with the LRC, Futch has been interning this summer with the Mammal Department at Zoo Atlanta, working with carnivores (lions, tigers, sun bears, otters, giant and red pandas, a binturong and a fossa).

“At the zoo, I help the zookeepers with their day-to-day tasks, so it’s a lot of cleaning. I also get to help feed the animals and even help with some of the upkeep of trained behaviors that the keepers and vets use to check on the animals," says Futch. "Recently, it was the twin pandas’ birthday, so we’ve been getting ready for that for a while. I got to help make their ice cake and presents of cardboard boxes filled with treats.”

Futch plans to continue to pursue her interest in animal behavior research, but also plans to explore the field of conservation and community development, working with local communities to develop sustainable environmental practices and promote conservation. She gives the entire Wofford Department of Psychology credit for her success with a special thanks to Reid. "He's the one who connected me with Dr. Beran and has written countless recommendation letters for me," says Futch. "He's currently got my papers plastered all over his office door.... It feels pretty cool knowing that I've contributed to science, even in a small way."

Read more about the research of Futch and the team of researchers at the LRC: