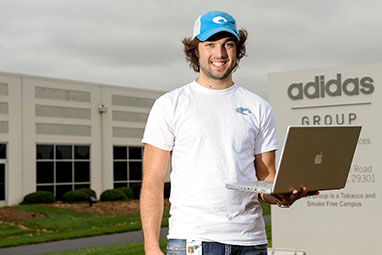 Wofford senior computer science major Connor Hopkins was intimidated when his professor, Dr. David Sykes, announced that Adidas was looking for a computer programming intern to automate data entry using an iMacros scripting program – so intimidated that he didn’t even consider applying for the experience.

“I thought it would be too much,” says Hopkins. “But then I realized I needed a summer job, and Adidas was still hiring.”

Several months later, Hopkins is pioneering the iMacros program for Adidas in Spartanburg, with his sights set on Germany.

Hopkins created macros to route the thousands of purchase orders Adidas receives every day. “The macros automate web-processing,” says Hopkins. “It’s just one press of the button. It runs itself.”

According to Hopkins, his supervisor at Adidas was so impressed that he asked Hopkins to write an article on the iMacros project for the company-wide, weekly newsletter. The article, published in the Adidas Group newsletter, detailed how the iMacros program would help Adidas “create the new.”

“The article went to every single person in the company,” says Hopkins. “A software engineer from Adidas in Germany contacted me. If the project is a success – and it’s going very well so far – I could have a job as a software developer in Germany right out of college.”

Interested in computer science since his first year at Wofford, Hopkins says the work he’s doing now is not quite what he originally expected.

“It’s a lot more business than computing,” he says. “My job is to go to each router individually and see what they need, then build it, so I spend more time out of my desk than in,” he says. “I am creating meetings, meeting with clients, contacting them to make sure they have what they need, reserving rooms…. It has certainly increased my time management skills and my ability to communicate with others. It’s taught me to be a leader for sure.”

The process has helped Hopkins realize that he enjoys project management.

“The entire Wofford computer science department has had a huge impact on me,” says Hopkins. “I knew I wanted to be a computer science major right from the start. There were times that I questioned that decision, but I stuck with it because I’m too stubborn to quit.”

Now that tenacity is paying off for Hopkins (and Adidas).