Chaser, Pilley to be featured Friday, May 15, on Nat Geo Wild

Dr. Brian Hare’s ‘Barkfest’ to explore ‘the smartest dog in the world’ 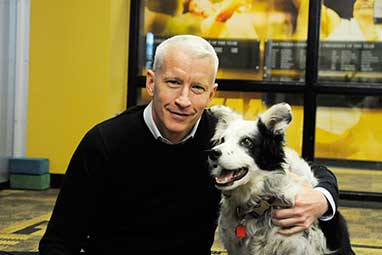 SPARTANBURG, S.C. – Chaser, a border collie who has been dubbed “the smartest dog in the world” and “the wonder dog,” will be featured at 10 p.m. Friday, May 15, on Nat Geo Wild channel’s “Barkfest.”

Joining Chaser will be Dr. John Pilley, professor of psychology emeritus at Wofford College, the dog’s owner and trainer who has taught her to understand more than 1,000 words, including learning context for those words.

“Barkfest” is hosted by Dr. Brian Hare, chief science officer and co-founder of Dognition. Hare, along with the world’s leading canine scientists and trainers, created the Dognition Assessment – interactive games and expert analyses that give dog owners an unprecedented perspective on how their dogs see the world. By understanding the dog’s mind, they say, owners build a deeper connection with the personality “behind the bright eyes that greet (them) every day.”

Hare interviews Pilley about how and why he has taught Chaser her vocabulary and trained her to recognize words and contexts.

Chaser and Pilley’s research, conducted with Wofford psychology professor Dr. Alliston Reid, was published in Pilley’s book “Chaser: Unlocking the Genius of the Dog Who Knows a Thousands Words” (Houghton Mifflin Harcourt), and has been featured internationally in books, news articles and features, magazines and television shows. CBS’s “60 Minutes” featured Chaser with Anderson Cooper in October 2014.

A preview of Chaser and Pilley’s appearance on Nat Geo Wild can be seen here:
http://channel.nationalgeographic.com/wild/barkfest/videos/chaser-the-wonder-dog/

Locally (in the Spartanburg area), Nat Geo Wild airs on Channel 1265 on UVerse, Channel 762 on Charter, Channel 276 on Direct TV and Channel 186 on Dish Network. (Check your local listings.)