NFL team to practice in Spartanburg at Wofford through 2019 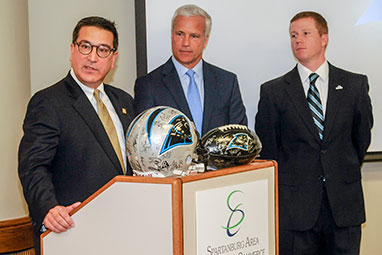 SPARTANBURG, S.C. – The Carolina Panthers NFL franchise will continue to hold its summer training camp in Spartanburg at Wofford College at least through 2019, the Spartanburg Area Chamber of Commerce announced today (Monday, Feb. 9, 2015).

Chamber CEO Allen Smith made the announcement of a five-year extension to the team’s contract with Wofford, flanked by Panthers President Danny Morrison and Wofford President Nayef Samhat. Members of Spartanburg City Council and Spartanburg County Council were in attendance in an overflow crowd of local business and community leaders gathered at the Chamber’s headquarters.

“This is exciting news for the Spartanburg community and for tourism to our region,” Smith said. “Spartanburg is proud to be among the handful of communities hosting an NFL training camp. Most teams are moving to hold their camps on their home turf – only 11 of 32 teams hold training camp away from their home cities. I want to thank Jerry Richardson, owner of the Panthers, and Wofford College for creating this partnership for the community in which we all can share and enjoy.

“Last year, we hosted 49,000 visitors and enjoyed a $5.2 million economic impact from the camp,” he added. “Based on last year’s figures, this means over the next five years, we will welcome 245,000 Panthers fans to Spartanburg, and the economic impact will total $26 million.”

Smith noted that Spartanburg area residents also benefit from training camp in other ways. “Most especially, in having the joy of visiting camp themselves and taking their children to watch this professional football team – up close and personal – prepare for its season and to be able to see veterans and rookies alike vie for their jobs, and to have the chance for autographs and photographs.”

Morrison told the group, “I am excited and proud to be here with you today, and I want to tell you how happy the Panthers are to be extending our relationship with the Spartanburg community and Wofford College.

“Throughout our 20 years of holding summer training in Spartanburg, we have made it our goal to create the most family-friendly environment for our fans, and all of you have helped us do that and helped us attract visitors from all over the country – and even the world – to camp,” he added.

“This relationship – with Spartanburg and with Wofford – has been terrific. To play our games in North Carolina and then have training camp in South Carolina fits the overall philosophy of the Panthers as a two-state team. On behalf of Mr. Richardson and the Panthers, I want to thank the Spartanburg community and Wofford for making it a great relationship, and one we whole-heartedly extend.”

Wofford’s president thanked the Panthers and the Spartanburg community for continuing to support training camp on the college’s campus. “It is a privilege and honor for Wofford College to be able to continue to be the host site for the Carolina Panthers’ summer training camp,” Samhat said. “The strong relationship with the Panthers and owner Jerry Richardson and president Danny Morrison is one that benefits not only our campus, but the entire community. We are the conduit, the location, but the Spartanburg community makes summer training camp a success and we are honored to play a part in that.

“Bringing training camp to Spartanburg had a rippling effect as the college was transitioning from NAIA to NCAA Division II, with NFL-caliber facilities helping the program enter the Southern Conference. Getting the Panthers to campus was critical to Wofford’s current athletics success and profile.

Samhat added, “Wofford is so thankful for Jerry Richardson and the Panthers for providing this opportunity for the college. Mr. Richardson and his family continue to be generous to the college and to having a positive impact on the campus and our students. Just a few months ago, we announced that they have graciously committed to providing the funding for the Rosalind S. Richardson Center for the Arts and the Jerry Richardson Indoor Stadium for our campus, helping us to enhance our academics and athletics programs in major ways. We thank the Richardsons for their continued generosity and support for Wofford.

“We look forward to working with the Spartanburg community – the city, the county and the Chamber – to continue to enhance the training camp experience for our community and visitors.”

Panthers summer training camp is held each summer from late July to mid-August. Practices are free and open to the public, and Wofford hosts a community party during the opening weekend to celebrate camp.