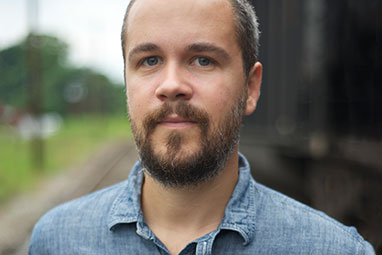 The 2006 Wofford College graduate’s “originality, inventiveness, questing spiritual intelligence and animal fixation aren’t easy to do justice to in the limited space here,” wrote Books of The Times reviewer Janet Maslin in the review published in January. “But they’re irrefutably good reasons to discover him for yourself.”

Pierce will be on Wofford’s campus on Thursday, Feb. 26, as part of the college’s Writers Series. He will talk about writing and read from his book in the 7:30 p.m. event in the Olin Teaching Theater in the Franklin W. Olin Building. The event is free and open to the public. On Friday, Feb. 27, at 7 p.m., Pierce will do a reading at The Showroom at HUB-BUB at 149 S. Daniel Morgan Ave., presented by the Hub City Writers Project. The program is free and open to the public.

Pierce is grateful for the good reviews the book is receiving. “You never know what to expect when you put a book into the world – especially when it’s your first – so naturally, the good reviews have been a thrill and a relief. I’m very glad people are connecting with these stories.”

Pierce’s short stories have appeared in The New Yorker, The Atlantic, The Oxford American, Subtropics and elsewhere. He has reported for National Geographic and for NPR programs, including “Morning Edition” and “All Things Considered.” Born and raised in South Carolina, he received history and English degrees from Wofford and earned his M.F.A. from the University of Virginia as a Poe/Faulkner Fellow. While at Wofford, Pierce was the 2004-05 Presidential International Scholar and authored “said the dark fishes,” winner of the Benjamin Wofford Prize for fiction writing. He also received NPR’s prestigious Joan B. Kroc Fellowship, an intensive training program designed to bring exceptional graduates into public radio and journalism. Following the fellowship, he stayed on as a producer, blogger and reporter.

“Hall of Small Mammals” was published earlier this year by Riverhead Books.

Pierce and his wife and daughter live in Charlottesville, Va.