Wofford Theatre to premiere 'The How to Be a Kid Show' 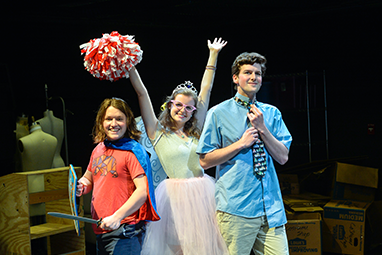 Sammy Verdino, a first-year student from Chapin, S.C.; Eliza Metts, a first-year student from Charleston, S.C.; and  Hartman Wendling, a senior from Atlanta, Ga., rehearse for the Theatre for Youth production of "The How To Be A Kid Show," which runs May 10 through 12 in the Sallenger Sisters Black Box Theatre in the Rosalind Sallenger Richardson Center for the Arts.
2018-05-04

SPARTANBURG, S.C. – Wofford Theatre carries on its tradition of staging an original children’s play to close out its season with the upcoming “The How to Be a Kid Show” set for May 10 through 12 in the Sallenger Sisters Black Box Theatre in the Rosalind Sallenger Richardson Center for the Arts.

Every other year since 2004, theatre instructor Kerry Ferguson and her Theatre for Youth class have spent a semester bringing an original children’s show to life, from the initial concept to the closing curtain. This will be the sixth world premier she has developed with Wofford College students, who have the opportunity to take part in every stage of the production process, serving as writers, designers, actors and producers.

Ferguson describes the play: “In ‘The How to Be a Kid Show,’ we meet Eddie and his weird and wonderful group of friends, who gather in his garage to hang out and play every Saturday afternoon. The one thing Eddie loves more than toast is hosting his own game show, and one sunny Saturday, the kids go above and beyond to put on a hilarious (and informative!) episode. Contestants have to figure out some of the biggest secrets of being kids by thinking fast, working as a team and using their imaginations – which is perfect, because that’s what kids do best!”

Ferguson’s approach to writing and directing theatre for young audiences involves finding inspiration in everything from crayon colors and world music to whoopee cushions and spontaneous dance parties. “Living inside a kids’ world is, to me, the most exciting and inspiring place to be,” she explains. This sense of excitement and perpetual inspiration led Ferguson to develop “The How to Be a Kid Show,” which invites audiences of all ages to rediscover the potential for adventure in everyday life. “Can you imagine if we could all re-harness the energy, imagination and self-confidence of childhood?” she asks. “That’s why I love this Theatre for Youth class and this new play project. It gives my students and me a chance to do just that … at least for a little while.”

The students in Ferguson’s Theatre for Youth class are highly involved in Wofford Theatre in many capacities. They train as actors, directors, designers, dramaturgs, technicians and more. Involvement in the class affords them the opportunity to do it all at once as they create original performances for future generations of theatre lovers.

Ferguson earned her undergraduate and graduate degrees at Washington University in St. Louis, where she studied dramatic literature with an emphasis in playwriting. She has traveled the country working in regional theaters and theater festivals as an actor, director, dramaturg and playwright. Ferguson joined the Wofford Department of Theatre as an adjunct professor in 2004, and, in addition to teaching Theatre for Youth, she teaches courses in acting, directing and theatre appreciation.

“The How to Be a Kid Show” is a high-energy, family-friendly show geared toward children ages 4 to 9, but it can be enjoyed by anyone who is currently a child or anyone who has ever been a child in the past. The show runs about one hour. Performances are at 6 p.m. Thursday through Saturday, May 10 through 12, in the Sallenger Sisters Black Box Theatre in the Rosalind Sallenger Richardson Center for the Arts, located on campus at 130 Memorial Drive. An additional 2 p.m. matinee performance will be held on Saturday, May 12.