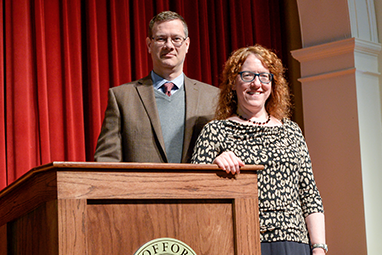 SPARTANBURG, S.C. – Wofford College has named three professors to endowed professorships, recognizing their excellence in teaching and their leadership and creativity.

“These three faculty members are true exemplars of the teacher-scholar,” says Dr. Michael J. Sosulski, provost. “Each has exhibited excellence and creativity in teaching, skill in developing courses and programs that serve Wofford student and has made significant contributions to knowledge in their respective academic fields. “They have shown exceptional leadership both in their classrooms and out, advising and guiding student research as well as serving in leadership roles on the faculty. We acknowledge and appreciate their work and congratulate them on their new roles in these endowed professorships. We also are thankful to those who have given generously to the college to make the professorships possible, rewarding exceptional teachers and scholars and, thereby, enhancing the student experience.”

Dinkins, who began teaching at Wofford in 2002, has developed and taught a variety of courses, including phenomenology, philosophy through literature, philosophy of medicine and a first-year seminar in the humanities, “How Do We Best Educate Citizens,” funded by the National Endowment for the Humanities. Her research interests include Socratic pedagogy in nursing education, phenomenology and Socratic inquiry in qualitative research, and health care ethics.

She frequently engages in interdisciplinary teaching with faculty colleagues in learning communities, and she recently designed and piloted the project-based general education course “Philosophy in Practice,” which guides students to apply philosophical theory and methods to community engagement and mindful practices in their own lives. She has co-authored two books, “Our Dissertations, Ourselves: Shared Stories of Women’s Dissertation Journeys” (Palgrave Macmillan) and “Listening to the Whispers: Re-Thinking Ethics in Healthcare” (University of Wisconsin Press), the latter of which was named an Outstanding Academic Title by the American Library Association. She also has published a number of book chapters and articles in a variety of journals, including the Journal of Psychosocial Nursing, HASER: The International Journal of Philosophical Practice and Nurse Education Today. In 2017, Dinkins received a nursing education grant from Sigma Theta Tau International Honor Society of Nursing (Alpha Mu chapter) to conduct site research at a nationally ranked medical center for her project “Nurse Preceptor Use of Socratic Pedagogy to Improve Critical Thinking in New Graduate Nurses.”

Dinkins received the 2010 Philip Covington Award for Excellence in the Teaching of Humanities and Social Sciences at Wofford.

Dinkins is a graduate of Wake Forest University and received her master’s and Ph.D. degrees in philosophy from Johns Hopkins University.

The William R. Kenan Jr. Professorship Endowment Fund, which makes possible a number of professorships, was established in 1972 by the William R. Kenan Jr. Charitable Trust. The endowed professorship fund was established to support and encourage a scholar-teacher whose enthusiasm for learning, commitment to teaching and sincere personal interest in students will enhance the learning profession and make an effective contribution to the college community.

Grinnell, who came to Wofford in 1997, was among the first 10 women in Wofford’s history to achieve the rank of full professor. She maintains an active and varied scholarly presence in her field of medieval literature, publishing in-depth, discipline-specific research such as “Animal Life and Men of Law in John Gower’s ‘Mirour de l’omme’ and ‘Vox clamantis,’” presented in 2017 at the 52nd annual Congress on Medieval Studies.

Grinnell is committed to the advancement of the art of teaching, evidenced in her publications as well through works such as “Interdisciplinary/Team Teaching and the Lone Medievalist,” forthcoming in “The Ballad of the Lone Medievalist” from Punctum Books. She also has published “Digital Unstorytelling: An Exercise for Teaching ‘The Cloud of Knowing’ to Undergraduates” in SMART (Studies in Medieval and Renaissance Teaching) and “Medievalism in ‘True Blood’” in the Journal of Dracula Studies, published in 2016.

Grinnell oversees the organization and training of Wofford’s peer-tutoring services. She also has established and maintained training workshops and support mechanisms for the tutors so that they gain the skills necessary to become effective partners in their peers’ education.

A graduate of Tulane University with bachelor’s degrees in French and English, Grinnell received her master’s degree and her Ph.D. in English from State University of New York at Buffalo. Her areas of expertise include Old and Middle English literature, the history of romance, the history of the English language, children’s literature, fantasy and science fiction, and ecocriticism and feminist hermeneutics.

The Reeves Family Professorship was created by a gift directed to the college by Wofford trustee J.E. Reeves Jr., president and treasurer of the Reeves Foundation. The $1 million gift carried with it a challenge for Wofford to raise an additional $2 million for professorships for outstanding faculty. As a result, Wofford added a total of $3 million to its endowment for professorships. Previous gifts from the Reeves family, long-time partners in the mission of the college, include the Reeves Tennis Center and the Reeves Family Endowed Scholarship Fund, which provides support for nine students annually at Wofford.

Terrell came to Wofford in 2000 after teaching at Liberty University. Terrell’s primary research areas relate to regulation, environmental policy and ethics. He has lectured internationally on these topics, has given testimony before a congressional committee on environmental regulation and has led students on Interim international trips focusing on environmental and property rights issues. Terrell has written articles for a number of publications, including the Quarterly Journal of Austrian Economics, the Journal of Markets and Morality and the Journal of American Physicians and Surgeons, and he has contributed chapters to several books.

Terrell serves on the editorial staff of the Quarterly Journal of Austrian Economics and is a member of the editorial board of Political Economy of the Carolinas. He is an associated scholar with the Ludwig von Mises Institute and lectures each year at the institute’s summer program for undergraduates. At Wofford, he recently chaired the Interim Committee and is a sponsor of Reformed University Fellowship, a student organization. In addition, he has organized a successful guest lecture series for the Department of Economics for many years.

The T.B. Stackhouse Endowed Professorship of Economics was established in 1949 by the Wofford Board of Trustees in memory of Stackhouse, who graduated from Wofford in 1880 and resided in Columbia, S.C.

Endowed professorships and chairs allow Wofford to attract and retain faculty known for excellence for their teaching, scholarship and for leadership and creativity in developing programs in their fields of study.