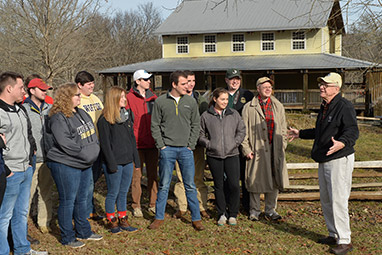 SPARTANBURG, S.C. - They walked in the footsteps of revolutionaries. During the month of January, a group of Wofford students who enrolled in the "Remember the Cowpens" Interim found themselves reading, researching, presenting and tromping through Upstate battlefields that were pivotal to American victory during the Revolutionary War.

"Interim is over but I have no doubt that the students in the class will 'Remember the Cowpens,'" says Simon Stricklen, enrollment and scholarship officer in the college's Department of Military Science. "They have a better understanding of the birth of our nation, and they now can give their own tour of the Cowpens Battlefield to family and friends."

The course was based on a detailed study of the Battle of Cowpens that Wofford students undertook 50 years ago during the college's first Interim. Many American military historians regard the January 1781 battle as the turning point of the Revolutionary War. The Wofford group studied the battle as it relates to the history of the American Revolution in the South and its place in local history. They examined the influence of the campaign on military strategy and tactics and explored the questions of battlefield preservation and memorialization.

According to Stricklen, who co-taught the course with Wofford archivist Dr. Phillip Stone, in addition to reading and classroom discussion, the class took three trips to Cowpens and visited battlefields at Kings Mountain, Musgrove Mill and Blackstocks.

"Since the anniversary of the battle was Jan. 17, we went to Cowpens National Park's celebration event that featured period campsites, lectures, weaponry and clothing," says Stricklen. "The students particularly enjoyed the cavalry demonstration featuring eight horsemen in full dress."

Stone and Stricklen also brought in local experts to talk with the group, including Dr. Joab M. Lesesne, president emeritus of Wofford and a retired brigadier general, who served as Wofford's first coordinator of Interim, and Dr. George Fields, president emeritus of Spartanburg Methodist College, retired major general and the person largely responsible for the preservation of our area's Revolutionary War history. Ed Hall, a retired lieutenant colonel, Vietnam veteran and assistant professor of military science, who taught the original 1968 Interim, led walking tours of the battlefields, and Ed Davis, a local military history collector and member of the college's multi-craft crew, gave the students a demonstration of the loading and firing of a black-powder weapon and allowed them to experience what it was like to work on the gun crew for a piece of Revolutionary War artillery.