Busbee interns with The Johnson Collection 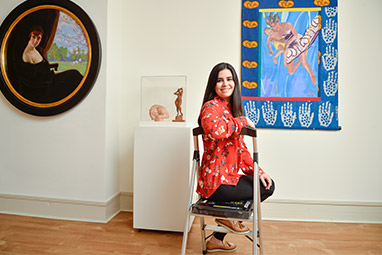 Working as a curatorial intern with The Johnson Collection is a way for Michal Busbee, Wofford Class of 2018, to apply the knowledge she's gained at Wofford College and build on her portfolio of real world experiences.

"Working on an exhibit from start to finish is something I've never been able to do," says Busbee, an art history major with a concentration in Asian studies from San Antonio, Texas. "In this instance, there is no syllabus or highly supervised project like I'd have for a class. I'm the one planning and developing ideas."

The Johnson Collection (TJC) is a local collection of over 1,000 pieces of art, all of which can be linked to the South through their creators or their subject matter. Busbee has developed and is curating "Is It A True Likeness?" - a show that explores the theme of women and traditional gender roles in the South. TJC curator Erin Corrales-Diaz has mentored Busbee through the process of selecting pieces for the show, writing text to present with each piece and arranging everything spatially within the exhibition so each work not only complements the others, but also incites conversation and reflection.

Busbee initially became interested in the topic after taking an art history course on Italian Renaissance art with Dr. Karen Goodchild, Chapman Family Professor of Humanities and chair of the Department of Art and Art History.

"We studied traditional gender conventions in Renaissance art and saw that portraits of women were often shown in profile. We talked about the averted gazes of the subjects, which showed they were submissive," says Busbee. "I saw a lot of similarities in some of the pieces that TJC owns. Recently, art depicting women has become more progressive, so I plan to juxtapose the different trends."

Busbee wants visitors to think about gender roles in our culture today, especially given the women's movement and recent #MeToo campaign. The exhibit went on display on April 16. Busbee will present a gallery talk at 6:30 p.m. Thursday, April 19, as part of the Spartanburg Art Walk. For more information on hours and directions, visit Thejohnsoncollection.org/.

Every year TJC offers top Wofford seniors in the Department of Art and Art History an opportunity to compete for a prestigious internship with TJC. Busbee's experience gave her the edge over other outstanding candidates. She completed an independent practicum cataloging an art collection owned by Milliken & Co. She did internships with the Smithsonian Museum in Washington, D.C., and the Belvedere Museum in Vienna, Austria. Busbee also has worked with Dr. Youmi Efurd, curator of Wofford's Rosalind Sallenger Richardson Center for the Arts. Busbee recently presented her research on Chinese objects from Wofford's permanent art collection at the college's Gender Studies Conference and is completing a senior capstone project on Chicano mural art from her hometown; it will be presented at the Upstate Research Conference in this month.

"Even as an 18-year-old, Michal showed an uncanny focus on her goals and has pursued opportunities that would help her with her goal of becoming a curator," Goodchild says. "Michal never ceases to amaze me with her intellectual curiosity and her drive to understand and to explain visual culture through multiple disciplinary lenses."

Busbee is thankful for the opportunity that TJC and the Wofford Department of Art and Art History have given her.

"This experience has shown me how much I truly enjoy working physically with the objects at TJC," says Busbee. "I now know I'm on the right track and am eager to pursue a career in the field."